Ahmaud Arbery’s killers arrive at court in shackles to be sentenced to life in prison: Three white men will have to serve at least 30 years before being eligible for parole – if at all – for shooting black jogger dead

The three white men convicted of murdering black jogger Ahmaud Arbery will be sentenced to life in prison today, and it may be 30 years before any are eligible for parole – if at all.

Gregory McMichael, 66, his son Travis, 35, and their neighbor William Roddie Bryan, 52, will all appear in court on Friday in Brunswick, Georgia.

In November, they were all convicted of murder – which carries a mandatory life sentence. Prosecutors chose not to seek the death penalty.

The only decision the judge will make on Friday is whether or not to grant any of them parole. If he does, the men will still have to serve at least 30 years behind bars before they are eligible to be considered for release.

Arbery’s family are due to speak at the sentencing hearing.

William Roddie Bryan, 52, arrives at court in Brunswick, Georgia, on Friday to be sentenced to life in prison for the murder of Ahmaud Arbery

Travis McMichael, 35, arrives in court in shackles on Friday morning to be sentenced for the murder of Ahmaud Arbery. He will be at least 65 before he gets out of prison

Gregory McMichael, 66, is shown arriving at court for the 10am sentencing hearing

‘Obviously we’re going to argue for life with the possibility of parole,’ said Frank Hogue, a lawyer for the elder McMichael. ‘Practically, that doesn’t mean much of a difference for a 65-year-old man.’

Arbery, a 25-year-old avid jogger, was running through the mostly white residential neighborhood of Satilla Shores on the afternoon of Feb. 23 when the McMichaels decided to grab their guns, jump in a pickup truck and give chase.

The younger McMichael would later testify to the jury they had a hunch Arbery might be fleeing a crime.

Bryan joined the chase in his own pickup truck after it passed his driveway, and pulled out his cellphone to record Travis McMichael firing a shotgun at Arbery at close range.

Arbery had nothing on him besides his running clothes and sneakers.

The video caused outrage when it emerged months later and it became clear that none of the men involved had yet been arrested after a local prosecutor concluded the killing was justified.

The three men will be allowed to address the court if they wish during Friday’s hearing, and prosecutors from the Cobb County district attorney’s office will be able to call on Arbery’s relatives to share victim impact statements.

Ahmaud Arbery’s family and friends arrive at the courthouse in Brunswick, Georgia, on Friday morning 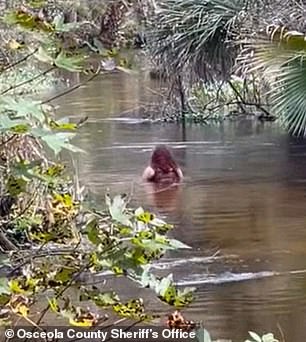