The Art Ross Trophy is not on its way back to Dallas any time soon. At least it’s not coming to be handed over to Jamie Benn as it was five years ago when he led the NHL in scoring before having an even more productive season a year later.

Those days are gone, but it really doesn’t matter. All the complaints about whatever happened to Benn are in the process of disappearing as he enjoys his finest playoff moments ever, as he bangs opponents and delivers goals and endeavors to bring the only trophy in hockey that matters to Dallas for the first time in 21 years.

Benn scored a go-ahead goal in the third period Thursday night, and when it failed to hold up, he assisted on Alexander Radulov’s overtime winner that gave the Stars a 2-1 Western Conference Final advantage over the Vegas Golden Knights.

Ten wins down. Six to go. Who thought these guys were headed for anything like that?

This thing all started so quietly for Benn and the Stars. He wasn’t scoring and the team wasn’t scoring when the season was postponed in mid-March. Nobody did much of anything in the Edmonton games that led to the Stars being installed as the No. 3 seed. And they were mere seconds away from being down 3-1 to Calgary and going very, very quietly when Joe Pavelski’s hat trick saved them.

Since then, the scoring heroes have been all over the place. Pavelski’s hat trick was the first ever for a Dallas Star but Denis Gurianov followed with a wild, four-goal game against Calgary and, just to top that, how about a hat trick with a Game 7 overtime winner from unknown rookie Joel Kiviranta to eliminate Colorado? Defensemen have been jumping into the play every night and they have factored into almost 80% of the scoring plays for the Stars at Rogers Place.

The thread running throughout is the unexpectedly steady scoring beat now composed by Benn, the team captain and once elite player showing at age 31 he’s prepared to dispose of contract talk or any other complaints about his diminished scoring — once voiced loudly by team president Jim Lites during the 2018-19 season. Benn was better than a point-a-game scorer in 2015 and 2016. The last two seasons, those averages fell to .68 per game and .59.

But with two points in Game 3, Benn took over the team scoring lead with 16 points in 19 games. He’s tied for 12th in the league with Vegas’ Mark Stone, a younger player fans have fallen in love with for his aggressive play and scoring skills.

Then again, the 11 players ahead of Benn on the postseason scoring chart are younger than the Stars’ captain as well. The NHL is a young man’s league, so age is not on his side — not when he has played left wing for more than 800 games with an old-school, physical style that wears on his hips.

Benn nearly won Thursday’s game with a shot at Robin Lehner at the buzzer that didn’t quite make it past the Vegas goalie. He’s firing. He’s buzzing. He’s getting chances and making more of them than he has in some time, even as the playoffs have taken a turn from the fire wagon style of the Colorado series to the next-goal-wins nature of the Western Conference Final. 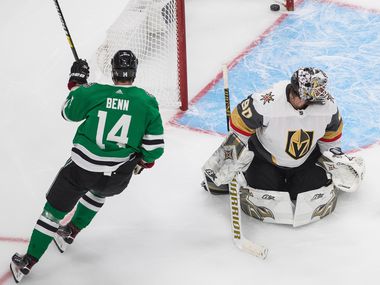