Bondi locals getting tested for coronavirus at the suburb’s free pop-up clinic have vented their anger at backpackers throwing rooftop parties.

Residents lined up at the eight testing centres set up by nurses at St Vincent’s Hospital inside Bondi Pavilion on Wednesday to get tested for COVID-19.

Sydney’s eastern suburbs is one of Australia’s coronavirus hotspots, but backpackers have continued to flout social distancing rules at the beach and in their hostels. 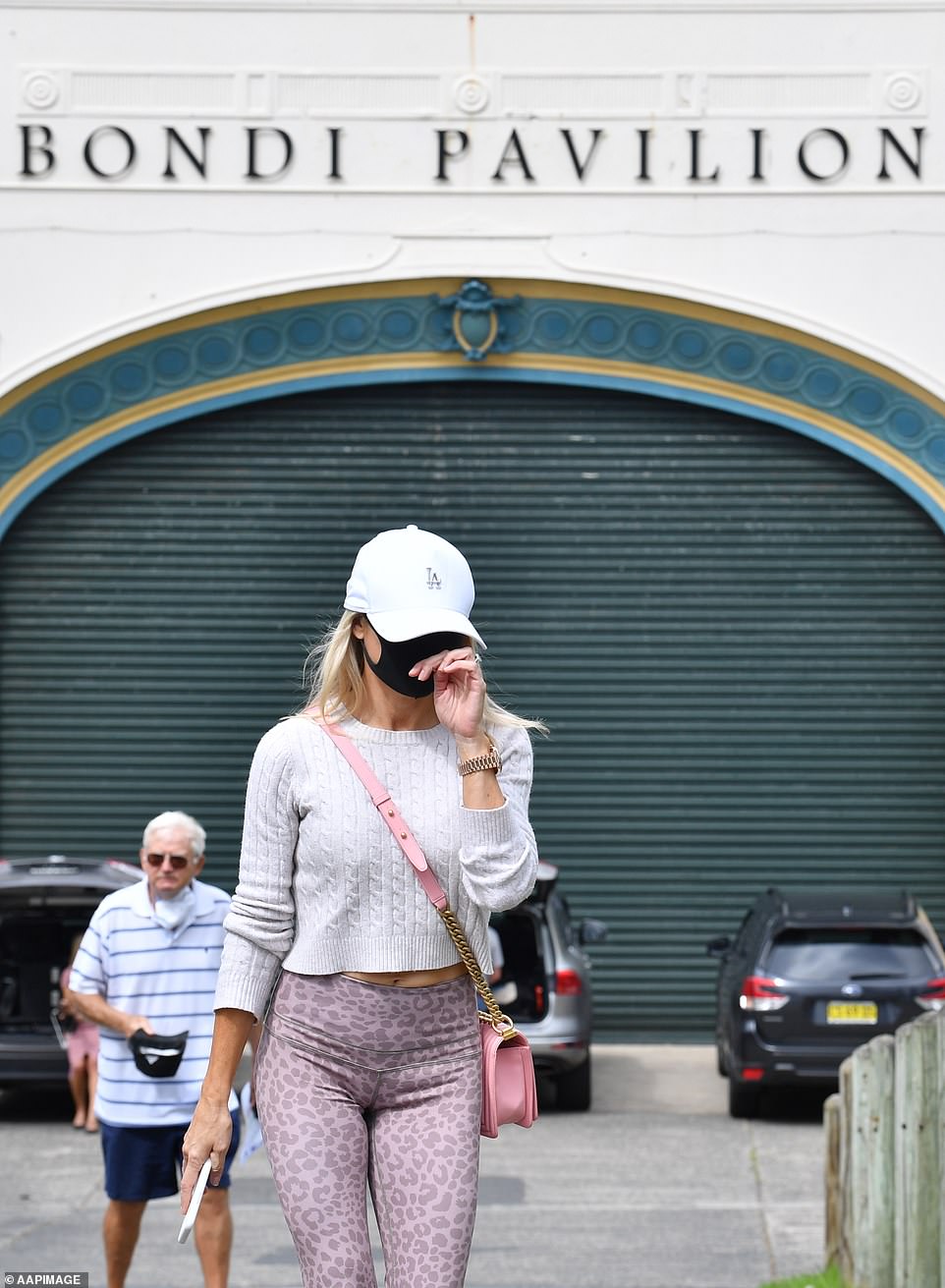 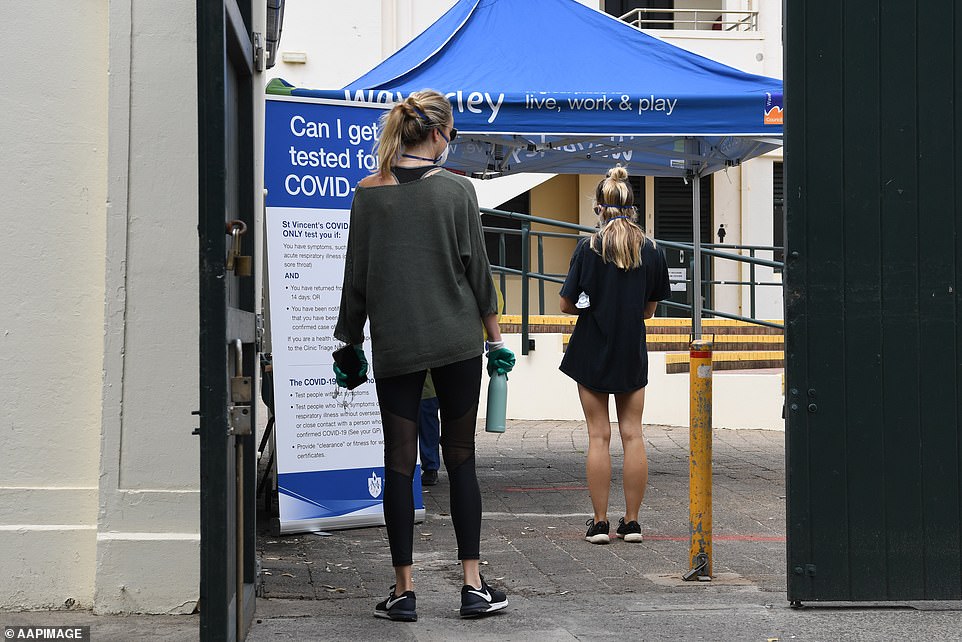 Nursing staff from St. Vincent’s Hospital see local residents and backpackers at a COVID-19 testing clinic in the Bondi Pavillion

One woman who lives with one housemate and wanted to stay anonymous said that backpackers should just return to their own countries.

‘I’ve seem them out and about not caring, plenty of them flouting the rules,’ she told Daily Mail Australia.

She left the testing station with a purple mask on, which nurses are handing out to potential virus victims as they exit the free clinic.

Owner of Beach Fit in Bondi, Paul Dias, decided to get tested as a precautionary measure.

‘Some people just don’t care. Backpackers, it’s not their country but they just want to keep on partying. It’s just unfair,’ he said.

‘They are still partying at night, on rooftops, and there are like 60 people. They think they might not get it but everyone can get it. Young people are dying from it.’

Sydney’s eastern suburbs is one of Australia’s coronavirus hotspots, but backpackers have continued to flout social distancing rules at the beach and in their hostels 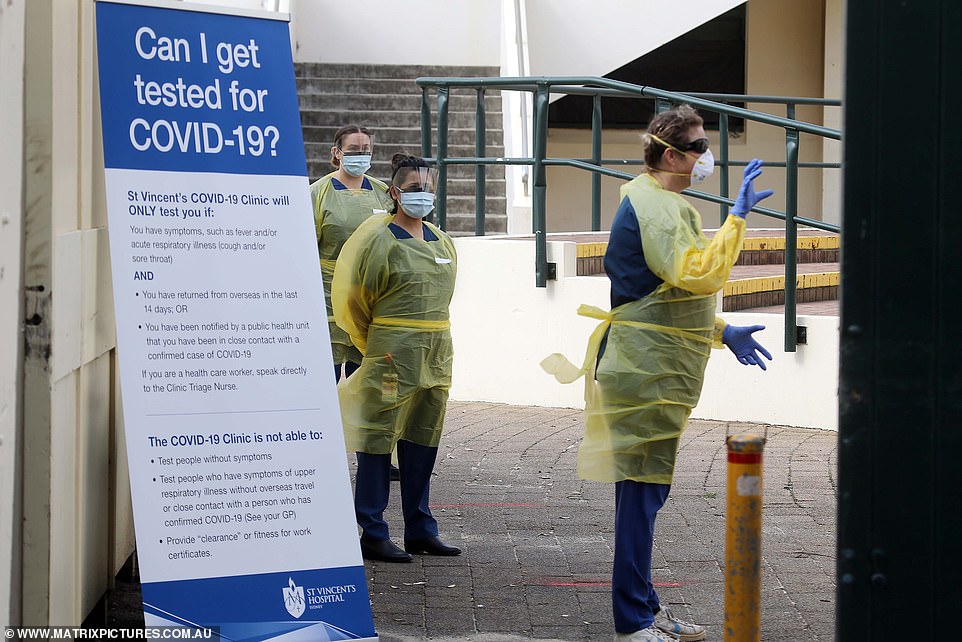 Under an emergency directive signed by NSW Health Minister Brad Hazzard, people can be fined $11,000 and/or be be jailed for six months for breaking strict social-distancing rules.

Examples of ‘reasonable excuses’ listed in the emergency directive are: obtaining food or other goods and services, travelling for the purposes of work or education if the person cannot do it at home, exercise, or medical or caring reasons.

People are also stopped from gathering in a public place with more than one other person.

Exceptions to the gathering rule include: gatherings of members of the same household, and gatherings essential for work or education.

Joe Hutchinson, 31, has spent three years living in Bondi and had a big night out two weekends ago – a day after viral images circulated of Bondi Beach around the world, showing negligent swimmers packed on the shoreline.

‘I work in construction management and was sent home with a cough. I think this is a great system to test people,’ he said.

‘I went to about four or five clubs that night in Bondi, like Ravesis and Mamasan. I probably shouldn’t have been out but it was before the lockdown and I thought it was okay.’

Mr Hutchinson noted hundreds of other partygoers in pubs and clubs a fortnight ago, particularly in the North Bondi area. He thought it looked similar to other weekends he’d been out.

‘I think it’s a good thing to have the backpacker panic, otherwise everyone would be taking the p*** with it,’ he said.

Susie Wilson, from nearby Vaucluse, walked up to the Bondi Pavilion wearing her activewear and a thick black mask.

‘I have symptoms that are consistent with flu. Aches, a cough, banging headache, all of it,’ she said.

The 41-year-old has been following the news closely and working from home for the past two weeks with her two-year-old toddler by her side. 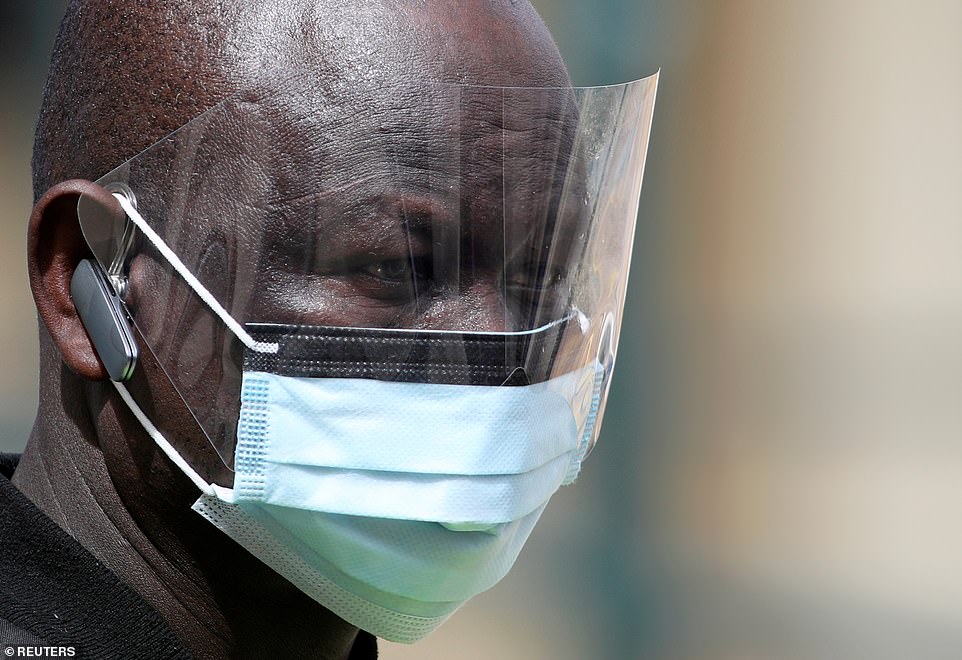 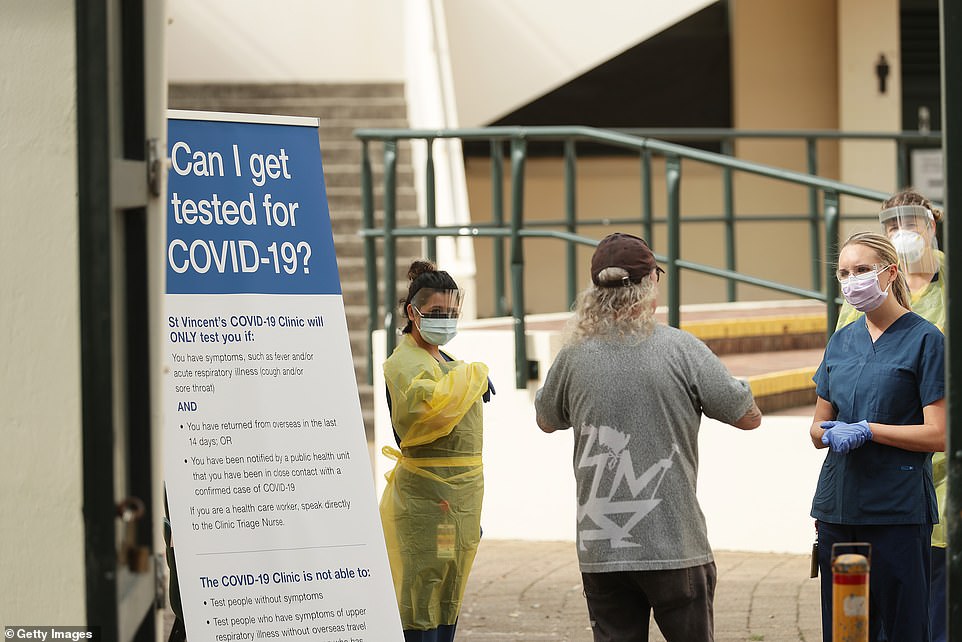 ‘I see everything on the news about people not social distancing… but I’ve been following the rules. I’m just hoping this is the flu,’ she said.

The project manager can’t recall coming into contact with anyone who has it, so if she rests positive, will wonder where she might have contracted it from.

Mark Luboff lives just across the road from the testing clinic and has an elderly neighbour, so he wanted to be cautious.

‘They put sanitiser on your hands, the nurse tilts your head back and you get two pricks up the nose,’ he said.

‘I’ve had a shortness of breath and mild sore throat but have been pretty quarantined.’

Mr Luboff wants to clear up once and for all whether he has coronavirus but results take 72 hours to come back, by which time he could have contracted it from someone else. 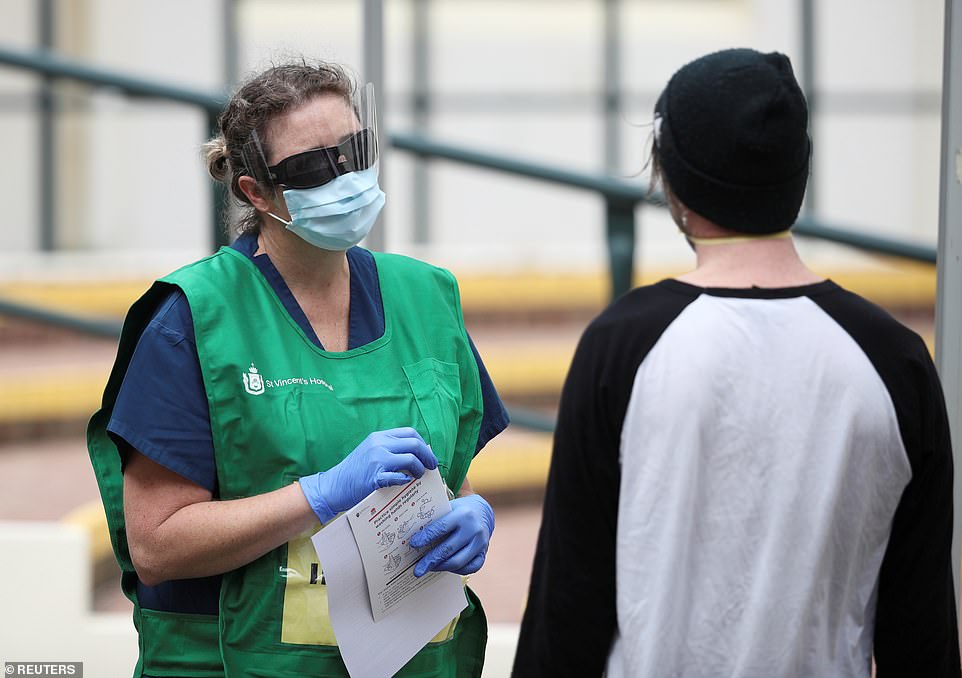 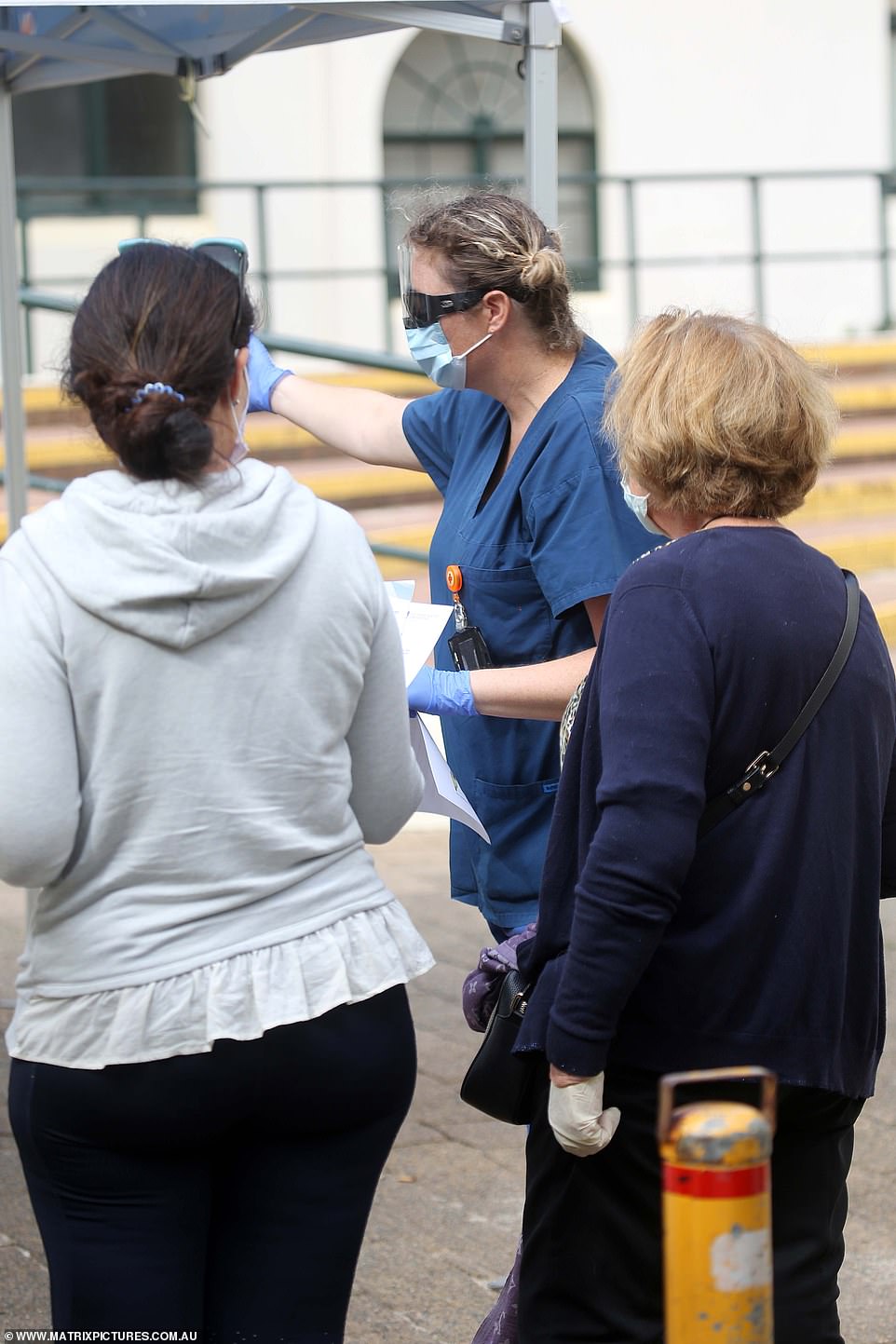 Anyone with a fever over 38 degrees Celsius, who has respiratory troubles or has been in contact with a known Australian or overseas case is being urged to take the test in Bondi, which involves sticking two swabs up each nostril

While he said it’s easy to point fingers at a particular group, like backpackers, if the numbers in ‘that community’ are high then that needs to be highlighted.

Mr Luboff, who is currently writing a book, lives alone so isn’t worried about passing the disease to anyone else in his household, should he have it.

Ocean swimmer Peter Howard, 81, believes the pop up clinic is a good idea, and while backpackers are good people, ‘they do live like sardines’.

Mr Howard, who lives just back from Bondi Beach on Campbell Parade, joked that he used to want to get into those ‘backpacker parties’ but now is glad he didn’t.

‘I came to get tested because I’m feeling a bit queasy. I live so close so I thought it was worth a test.’

For Georgia Ciano, a fever and constant sore throat had her wanting to call into the pop up clinic.

‘I actually called the ambulance 10 days ago because I couldn’t breathe, but they wouldn’t test me because I’m not over 70 and haven’t been overseas,’ she said.

The 47-year-old lives with her husband and daughter in the area and is glad she now has the opportunity to get tested.

‘The backpackers are obviously a big reason why we are down here but you can touch any surface and get it too,’ she said.

Anyone with a fever over 38C, who has respiratory troubles or has been in contact with someone who is infected is being urged to take the test in Bondi, which involves sticking two swabs up each nostril.

Only two people should gather in public spaces and ‘other areas of gathering: Households – no matter how large – can still go outside together, but individual people can only meet with one other person. The two-person limit doesn’t apply to workplaces, schools or households.

Moratorium on evictions from rental properties for the next six months: Scott Morrison said State and Territories will be moving to ban landlords from evicting tenants who are struggling to pay rent. Mr Morrison urged landlords to work with their tenants and banks on immediate solutions.

Playgrounds, skate parks, and outdoor gyms will be closed from Monday: Boot camps will be reduced to one-on-one outdoor personal training sessions.

Australians urged to only shop for the essentials and nothing more: Mr Morrison reminded people it isn’t a time for browsing or catching up with friends. ‘When you are going out for shopping, you should be going for just stuff you need and do it and get home,’ he said.

People aged over 70 or having chronic illnesses are discouraged from leaving their homes: Mr Morrison said elderly people should only go outside for doctor’s appointments or medical reasons. He said vulnerable groups who need help with shopping should access ‘support through their community or others’.

WHAT CAN I LEAVE MY HOUSE FOR?

Going to work, if unable to work from home: Australians who have the ability to work from home are strongly advised to do so. Those who can’t must follow social distancing measures when at their place of work.

Exercise: People working out should still follow the two-person limit. All boot camps of 10 people or less have effectively been banned.

To attend personal medical appointments, or for compassionate reasons: Elderly people in particular should only go outside for doctor’s appointments or medical reasons.

CAN I VISIT FAMILY MEMBERS?

Yes, however social distancing measures should still be adhered to.

A family split across two houses can meet in private, allowing people to visit their partner, siblings or parents.

People who live can only invite one friend over, while households of two people or more can’t have any visitors.

WHAT ABOUT HOUSEHOLDS WITH MORE THAN TWO PEOPLE?

Households – no matter how large – can still go outside together, but individual people can only meet with one other person.

If four people live together in a house, all four of them can take their dog for a walk.

The two-person limit doesn’t apply to workplaces, schools or households.

CAN OLDER PEOPLE GO OUT IN PUBLIC?

Elderly people are allowed to go outside for the same reasons as young people, but Scott Morrison has urged those over the age of 70 to self-isolate unless going to a medical appointment.

‘This does not mean they cannot go outside,’ Mr Morrison said on Sunday.

‘They can go outside and be accompanied by a support person for the purposes of getting fresh air and recreation, but should limit contact with others as much as possible.’

CAN I GO TO A WEDDING OR A FUNERAL?

Funerals are still limited to 10 people and weddings to five – including the officiator and the bride and groom.

WHEN DO THE NEW MEASURES COME INTO EFFECT?

The two-person rule will begin on Monday, while playgrounds, outdoor gyms and skate parks will be closed at midday.