Secret expert modelling on the spread of coronavirus in Australia is set to be made public on Tuesday.

The modelling is expected to show the effects of border closure and lockdown measures which have seen confirmed cases fall to their lowest level since February.

Deputy Chief Medical Officer Paul Kelly said on Sunday the curve appeared to be flattening, putting Australia in a better position than other countries.

But the past 72 hours have also seen the number of COVID-19 deaths increase by 15, bringing the total number of deaths to 46. 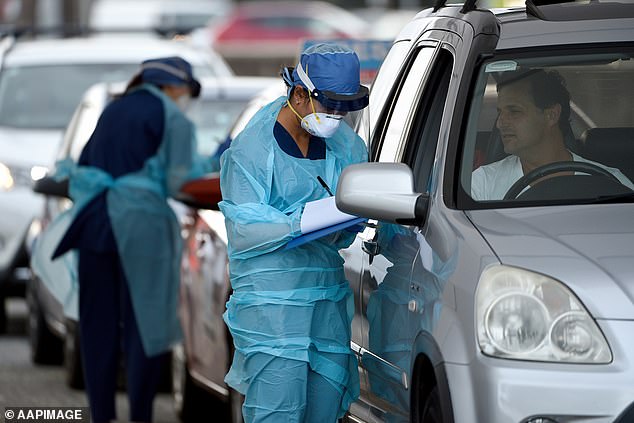 The number of confirmed daily cases of coronavirus peaked at 460 on March 28 but as of April 7, only 95 new cases have been recorded nationally (Medical professionals in Sydney are seen performing COVID-19 tests on members of the public at the Bondi Beach drive-through COVID-19 testing centre) 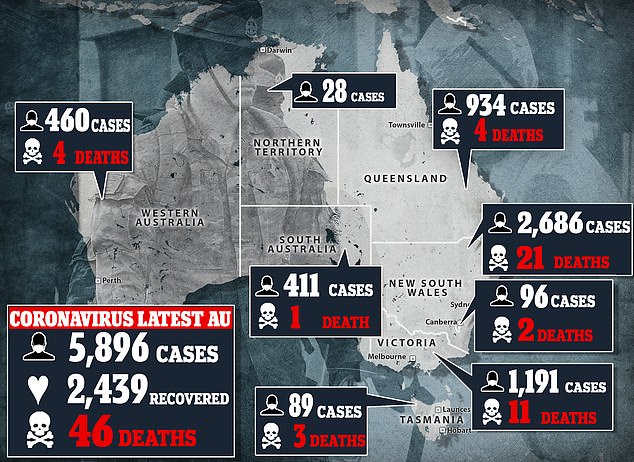 Australia has 5,896 confirmed cases and 46 deaths as of April 7, most of which have been recorded in NSW

Professor Kelly told The Australian Financial Review that Australia appeared to be successfully flattened the curve ‘at the moment’.

‘Our low mortality rate and our low percentage positive in our testing shows me that we are actually finding people early in this disease, isolating them and breaking those chains of transmission that spread through the whole population,’ he said.

The modelling, which was expected to be released last week, is predicted to show Australia’s response to the crisis has prevented the worst-case scenario of 4million cases from last month’s modelling.

Professor Kelly said Australia was now better placed than many other countries, such as the United States, which has more than 337,600 confirmed cases.

‘The things that we have done in the past weeks to prevent ourselves going into that situation have been successful up till now, and we have to redouble our efforts to make sure that doesn’t happen into the future,’ he said. 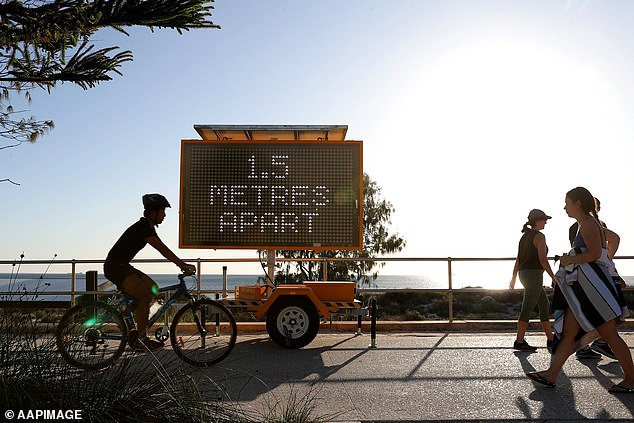 On Tuesday, the government will make public its expert modelling on the spread of coronavirus and the danger of prematurely easing social distancing rules (Members of the public are seen walking past a sign reading ‘1.5 Metres Apart’ in Perth)

Most of the cases of coronavirus come from people who contracted it overseas, or from those who have come in contact with someone infected.

But Professor Kelly warned the most concerning category of infections to health authorities was the 8 per cent of Australia’s cases reported as being locally transmitted.

Strict social distancing measures were introduced last month as a way to curb the spread of the disease as the infection rate began to rise, overwhelming hospitals and leaving healthcare workers scrambling for protective equipment.

Each of the states has since shown a slow decrease in daily confirmed coronavirus cases.

NSW has seen a decrease to just 49 new cases on April 7, which is a major drop from the peak of 212 new cases reported on March 28.

Victoria had a peak of 111 new cases March 28 but that number has slowly dropped with only 23 new cases on April 7.

Queensland peaked at 78 new cases on March 24 but that number has decreased to 13 on April 7.

Western Australia peaked at 44 new cases on March 44 but has continued to stay low with April 6 reporting only 7 cases.

South Australia highest recorded daily cases were 38 on March 26 but on April 6, the amount dropped to only 2 cases.