This is the dramatic moment that armed police open fire on the Mercedes which was ‘deliberately rammed into the Ukrainian ambassador’s car in London five times’.

Officers opened fire to try and stop the man after he had smashed into ambassador Natalia Galibarenko’s parked car outside the embassy building in Holland Park, west London, at around 10am yesterday.

In a video filmed from a nearby building by witness Darcy Mercier, the armed officers can be heard shouting ‘open the door now!’ at the man, 40, inside the motionless car, before they fire two shots. 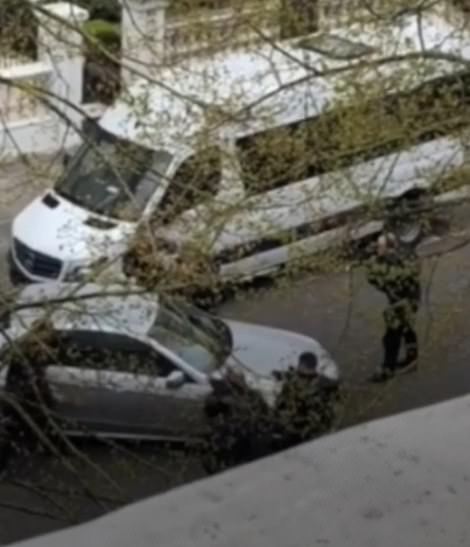 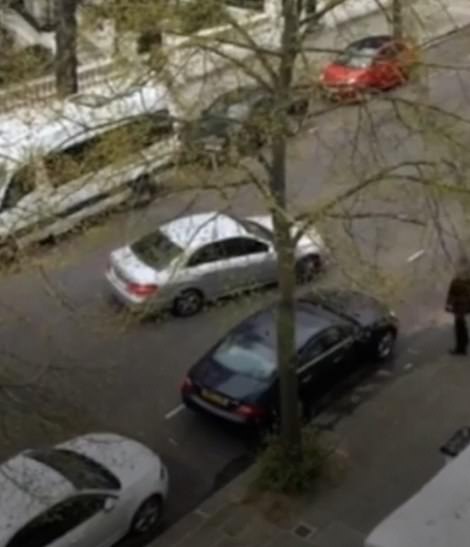 This is the dramatic moment that armed police open fire on the Mercedes which was deliberately rammed into the Ukrainian ambassador’s car in London five times.  In a video filmed from a nearby building by witness Darcy Mercier, the armed officers can be heard shouting ‘open the door now!’ at the man, 40, inside the motionless car, before they fire two shots.

Later in the video, officers appear to fire further shots while one hits the driver’s door with a crowbar.

They then shout ‘the door is open’ and the man screams before rolling out of the car onto the floor where he is tasered and arrested.

Mr Mercier, who was watching the scene unfold, told the BBC that the man kept driving up and down after arriving in the street before he rammed the ambassador’s car.

‘A couple officers showed up, they blocked the street and they were trying to talk him out of the car,’ he said. 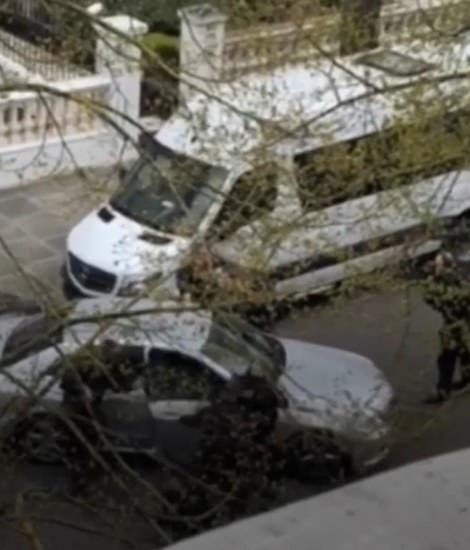 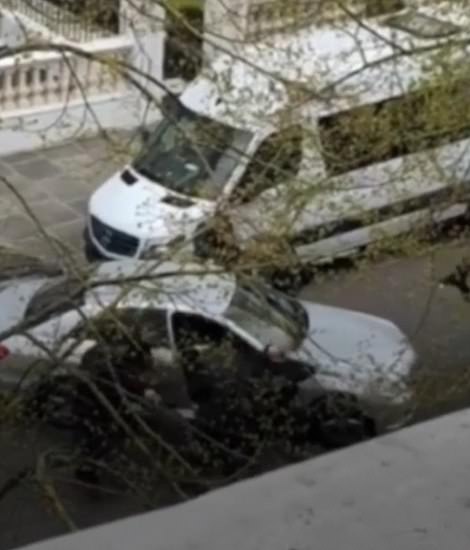 Later in the video, officers fire further shots while one hits the driver’s door with a crowbar. They then shout ‘the door is open’ and the man screams before rolling out of the car onto the floor before he is arrested

‘He kept driving back and forth in a somewhat threatening manner and the other officers with the firearms showed up.

‘From what I saw it looked like they shot out the tyres of the car and that is when they opened the car and tasered him.’

This afternoon police announced that the 40-year-old has been sectioned under the Mental Health Act and was taken to hospital for treatment before being taken into custody.

A spokesman added that the incident is not being treated as terrorist-related.

Officers had opened fire to try and stop the man after he had smashed into ambassador Natalia Galibarenko’s parked car outside the embassy building in Holland Park, west London, crashing into it twice at around 10am.

Yesterday the man was initially arrested on suspicion of attempted murder of police officers and criminal damage.

Bruno Baillavoine, who lives next door to the Embassy in leafy Holland Park, west London, said his wife saw a car parked in the middle of the road ‘blaring music out’ before they heard two bursts of multiple gunshots.

The 65-year-old company director said: ‘In the morning, my wife came back from walking the dog at 7.45am.

‘She told me about a car in the middle of the road with music blaring out and it’s lights flashing.

‘She told me it was a silver Mercedes and said ‘Do you think we should call somebody?’

‘I said ‘no, of course not.’ But then we heard a noise later on and the dog went crazy.

‘I just rushed out. It sounded like a crash, but then my wife heard gunshots.

‘We went out and at that time I could see there were police everywhere in big numbers, really big numbers,’ he added.

Another witness claimed that the car was ‘blasting Ukrainian music in some kind of protest against the embassy’, after arriving at about 7am. 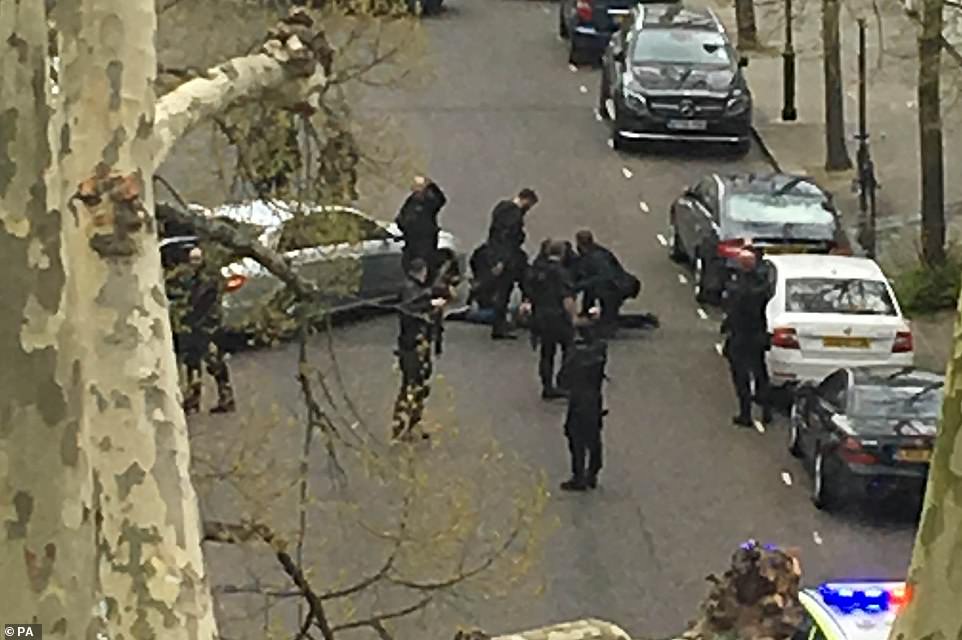 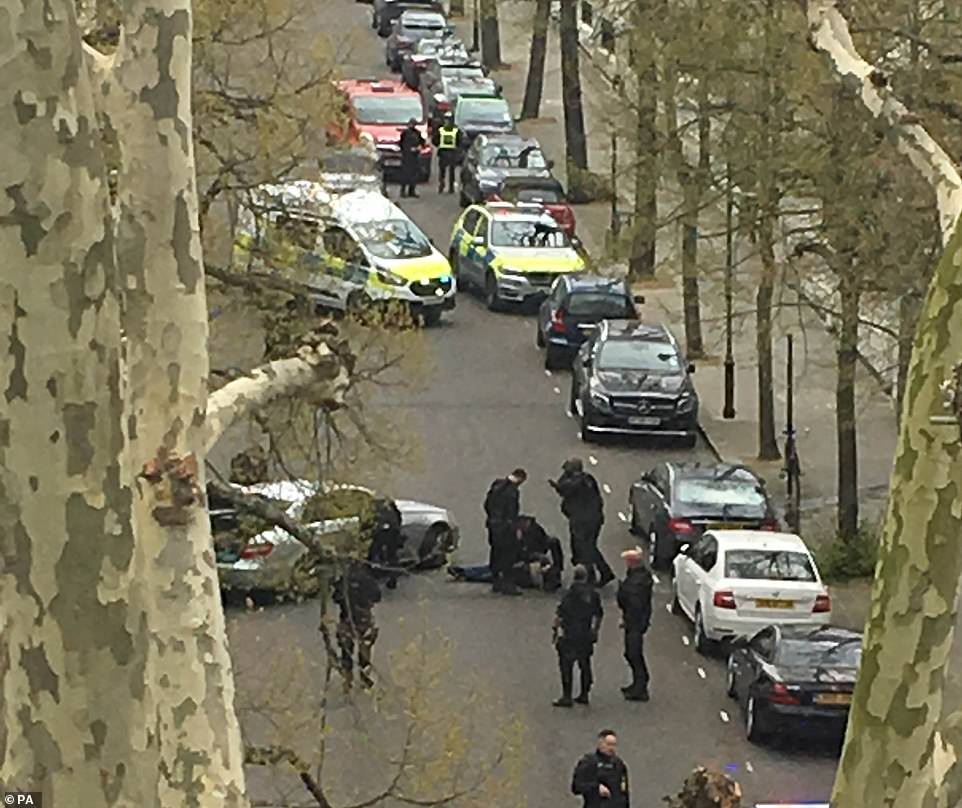 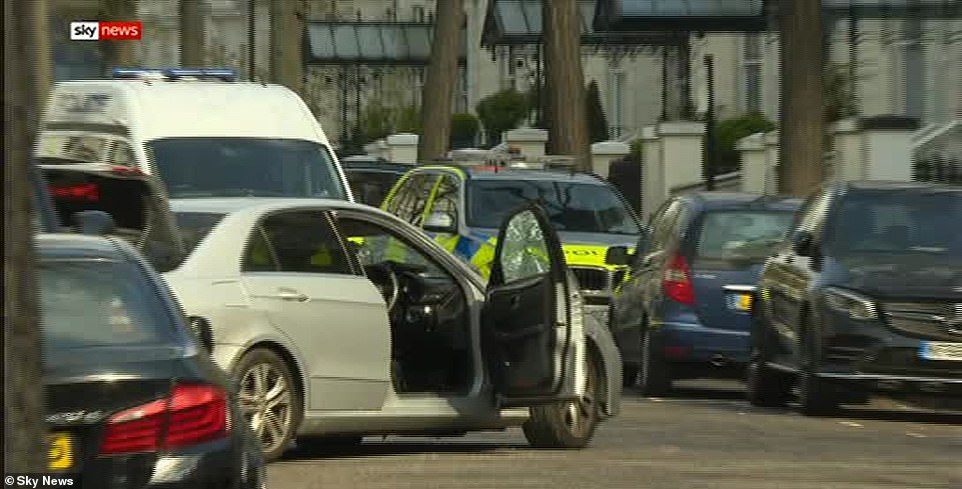 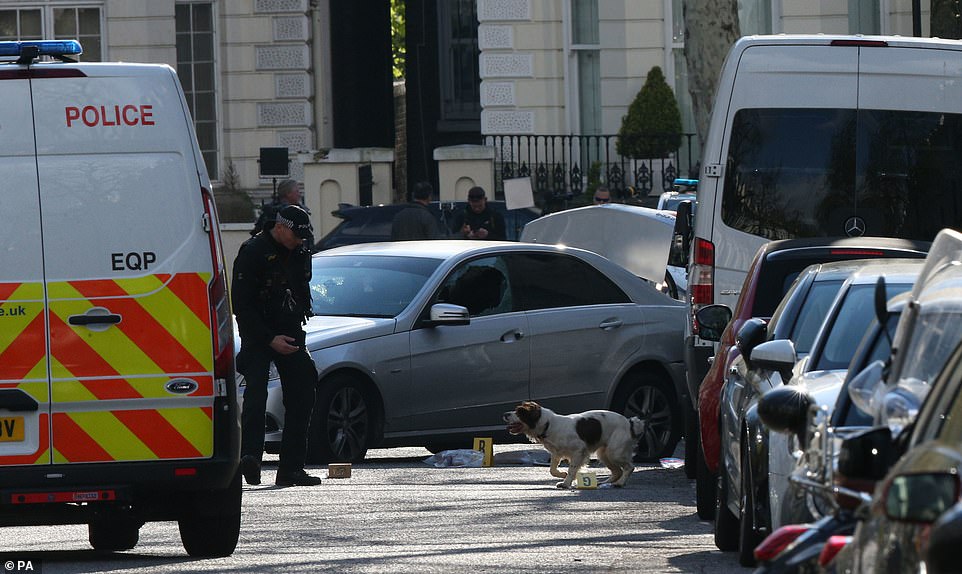 A police sniffer dog at the scene near the Ukrainian Embassy in Holland Park, west London where the ambassador’s car was rammed into by a Mercedes

A statement from the embassy said: ‘Around 10am on Saturday 13 April, the official vehicle of the Ambassador of Ukraine to the United Kingdom was deliberately rammed as it sat parked in front of the Embassy of Ukraine’s building.

‘The police were called immediately, and the suspect’s vehicle was blocked up. Nevertheless, despite the police actions, the attacker hit the Ambassador’s car again. 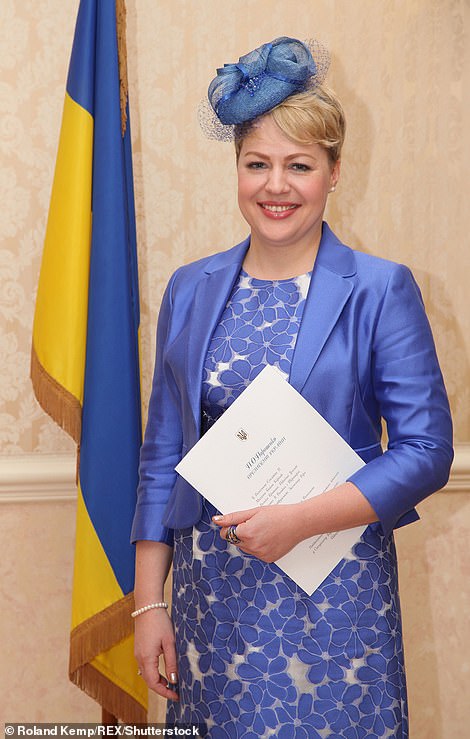 Ukraine Ambassador Natalia Galibarenk, pictured, was not in the car at the time

‘In response, the police were forced to open fire on the perpetrator’s vehicle. The culprit was apprehended and taken to a police station. No one of the Embassy staff were injured. The police are investigating the suspect’s identity and motive for the attack.’

Emma Slatter, who is Visa’s general counsel, watched the scene unfold with her partner David Hinsley, a banker who is also in his 50s.

‘We could see two police cars at this end of the road and one about half way down looking the other way,’ she said.

‘It seems like he was moving erratically or wanting to move away from being boxed in, maybe not realising there were police behind him as well.

‘That was when he collided backwards.’

‘I think I heard about half a dozen shots,’ she said.

The couple fled from the window in case of a stray bullet until the firing was over.

‘I could see police had got the guy out of the car and they had him on the ground,’ Ms Slatter continued.

‘The police seemed in charge. There were probably about eight to 10 guys in full body armour, some with submachine guns.

‘He (the suspect) was stumbling but he wasn’t resisting. We thought he might’ve been shot but there wasn’t any evidence of any blood.

‘They frogmarched him into the back of the police van,’ she said, before the suspect was transferred into an ambulance.

Police have sealed off the street near the Ukrainian embassy in west London. 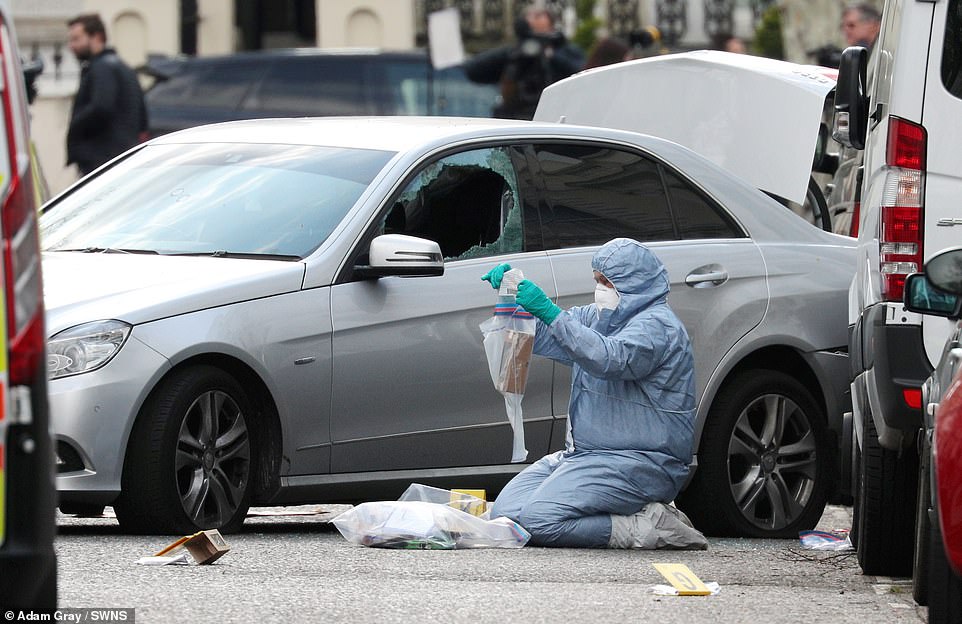 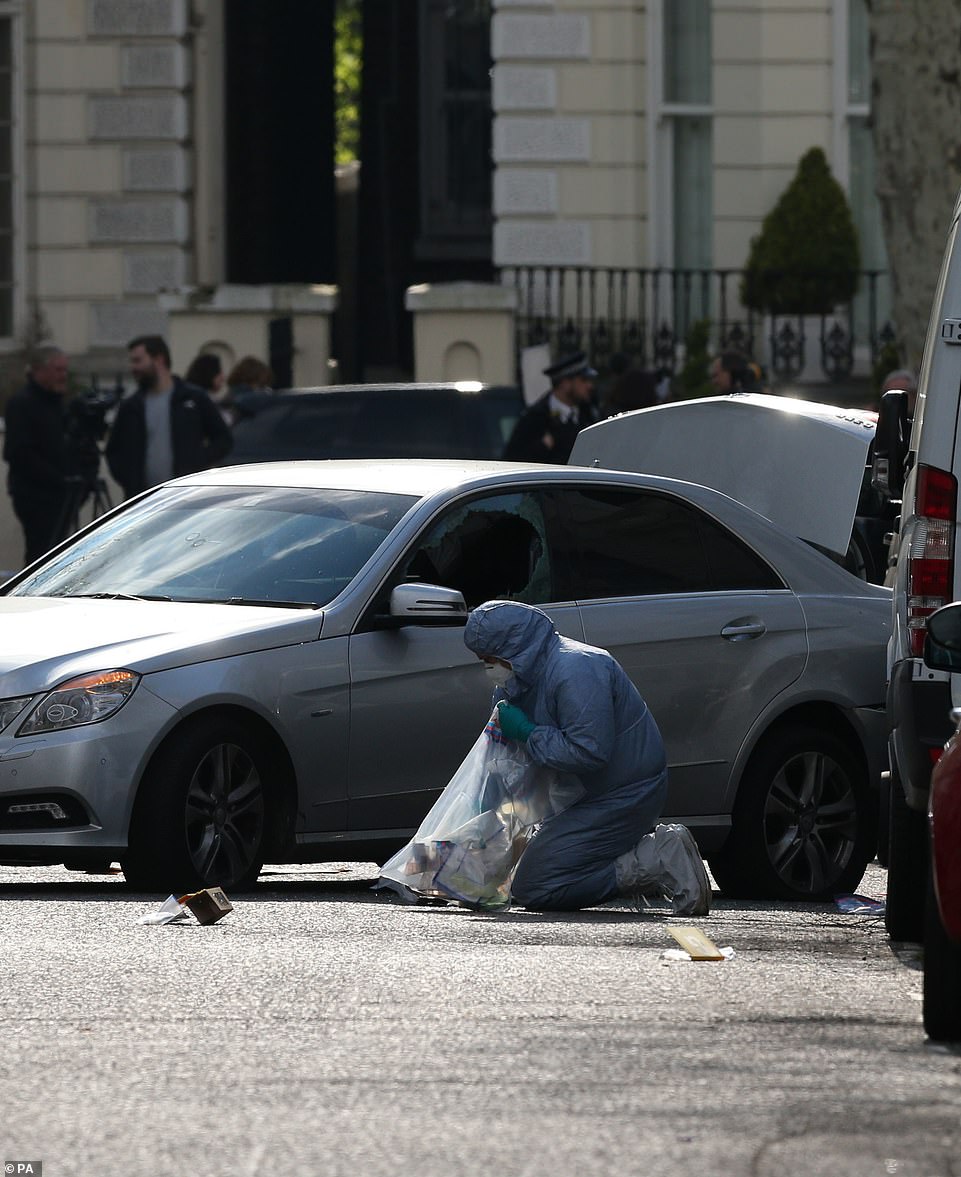 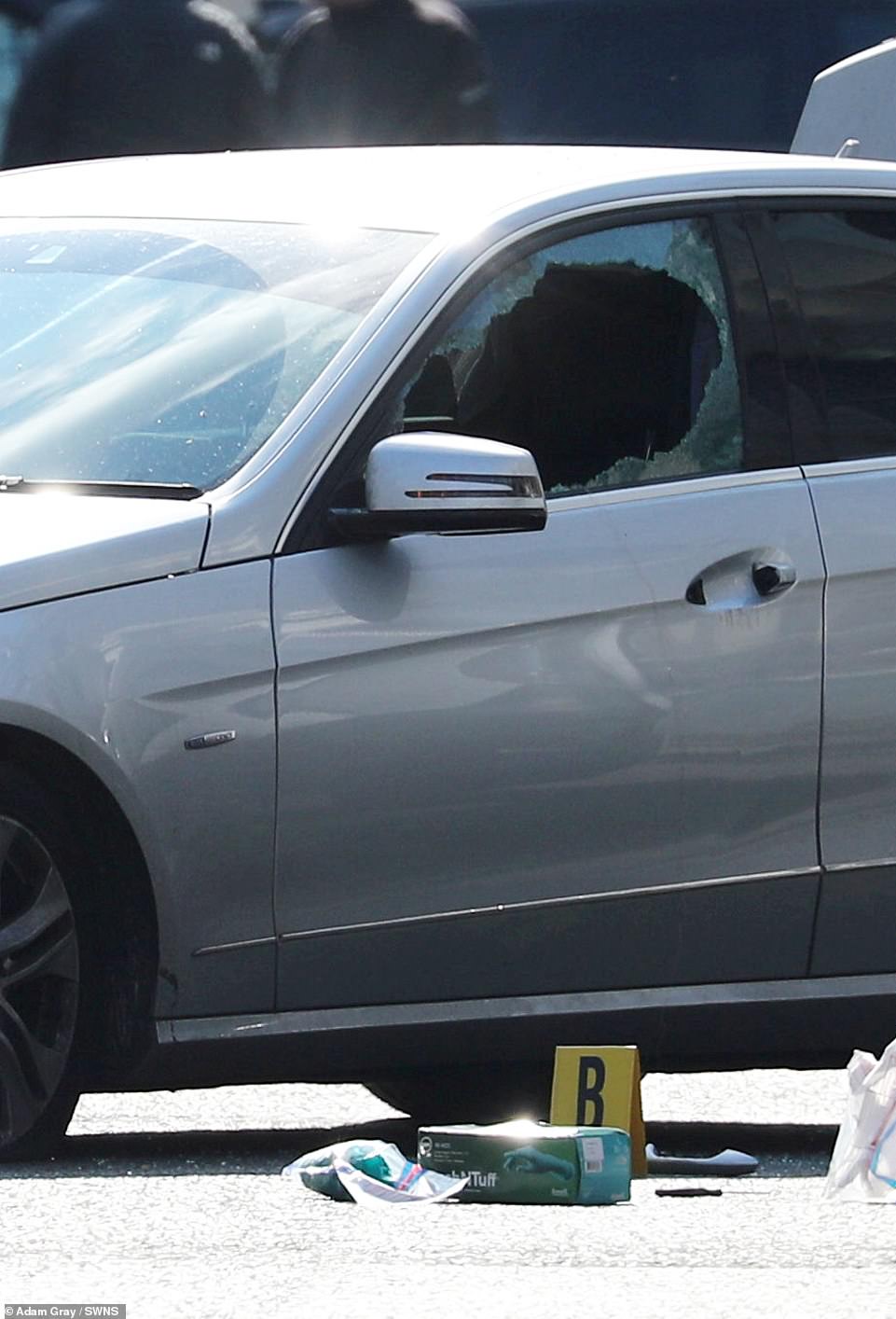 Bruno, 65, whose house is within the police cordon said: ‘I heard one police man saying to another ‘break the glass’ and they broke both windows on the front of the car’ 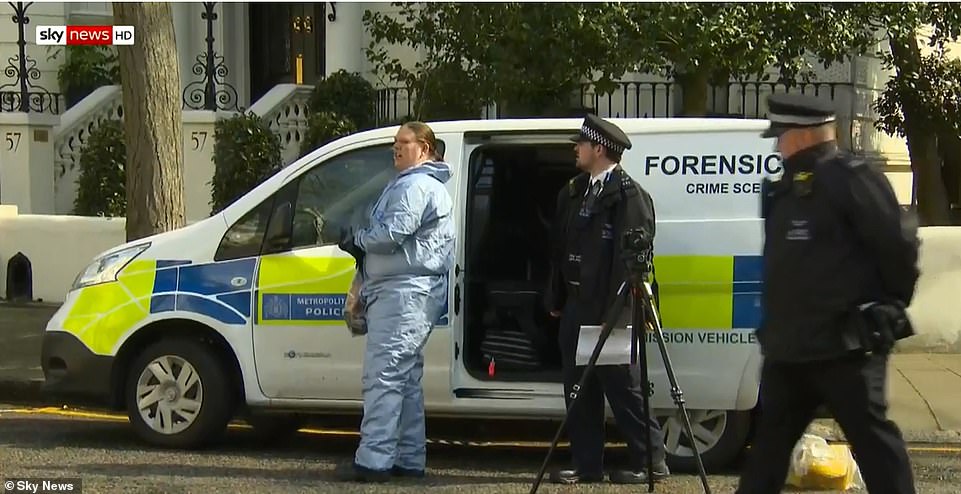 There was a heavy police presence at the scene for several hours, with police joined by a forensics team to investigate

A woman who works at a nearby shop said she heard shots fired twice between 10am and 11am on Saturday.

The woman, who did not wish to be named, said officers arrived ‘very quick’, adding: ‘I saw many police cars coming.’

Bruno, 65, whose house is within the police cordon, said: ‘I heard one police man saying to another ‘break the glass’ and they broke both windows on the front of the car.

The boot of the silver Mercedes was full of a builder’s work bag and several other items, including a shopping bag from H&M 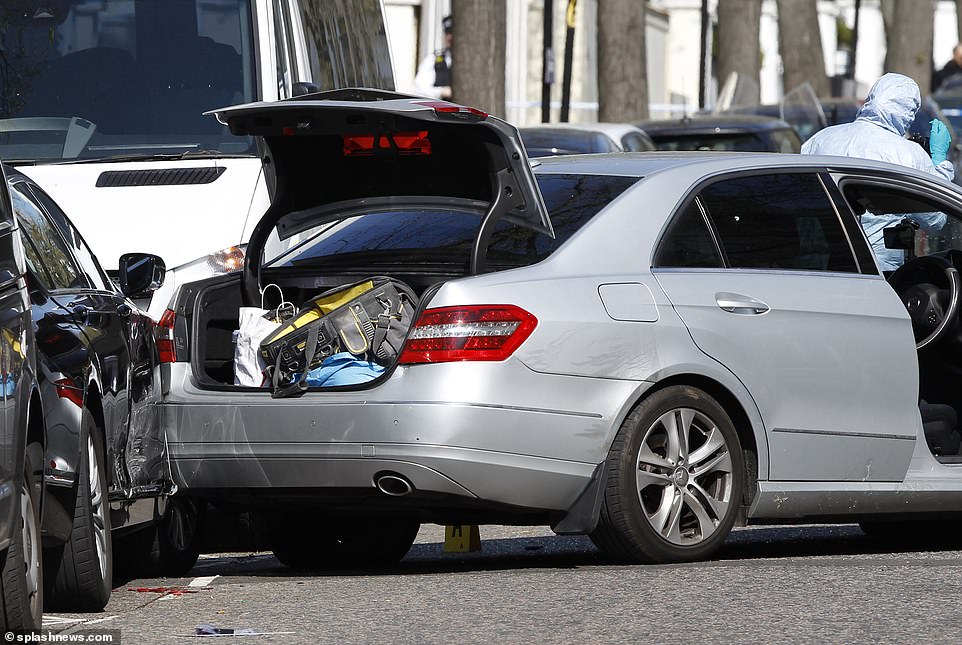 The damage to a parked car can be seen by the boot of the Mercedes, which crashed into several parked vehicles outside the embassy 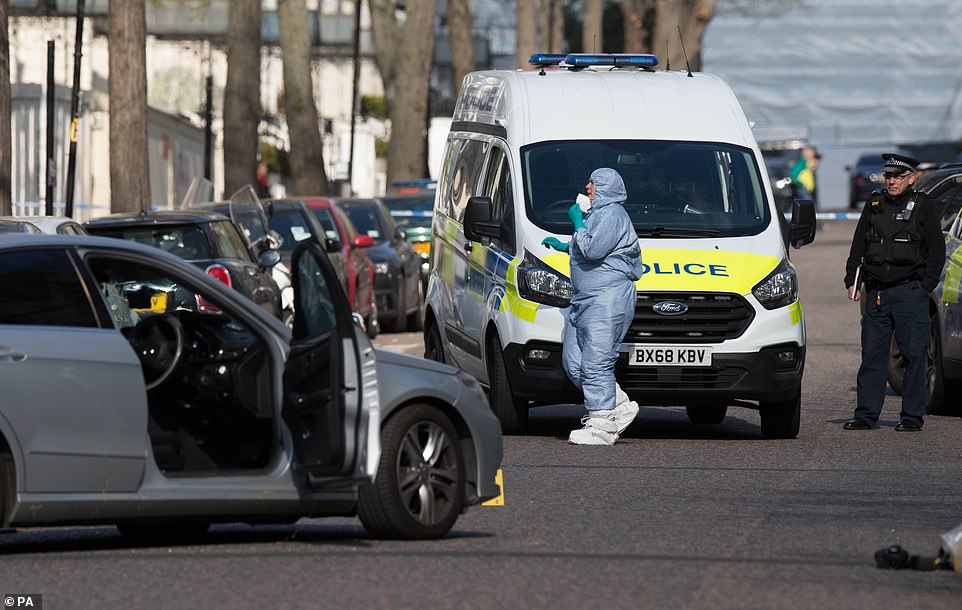 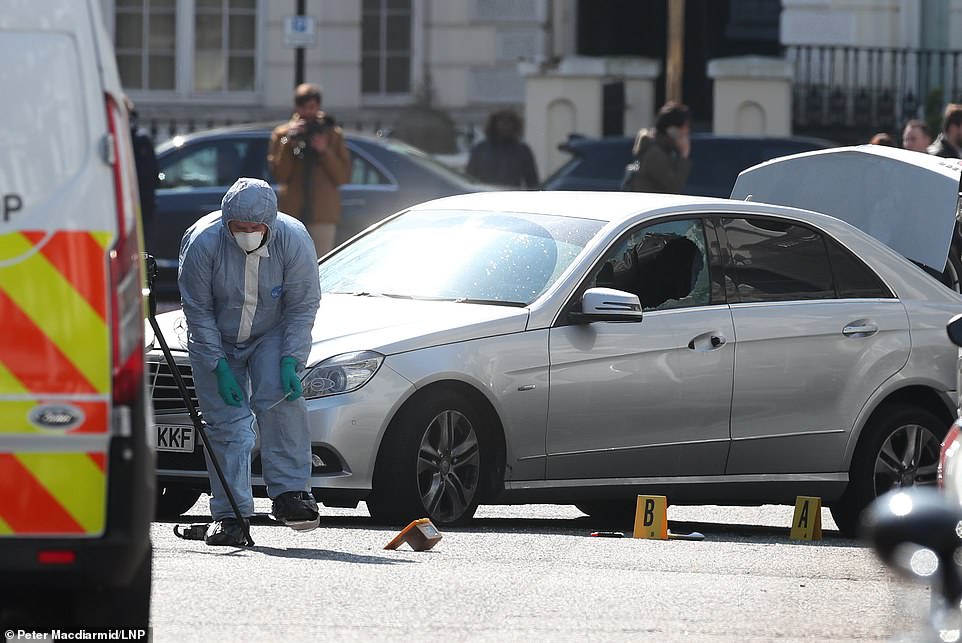 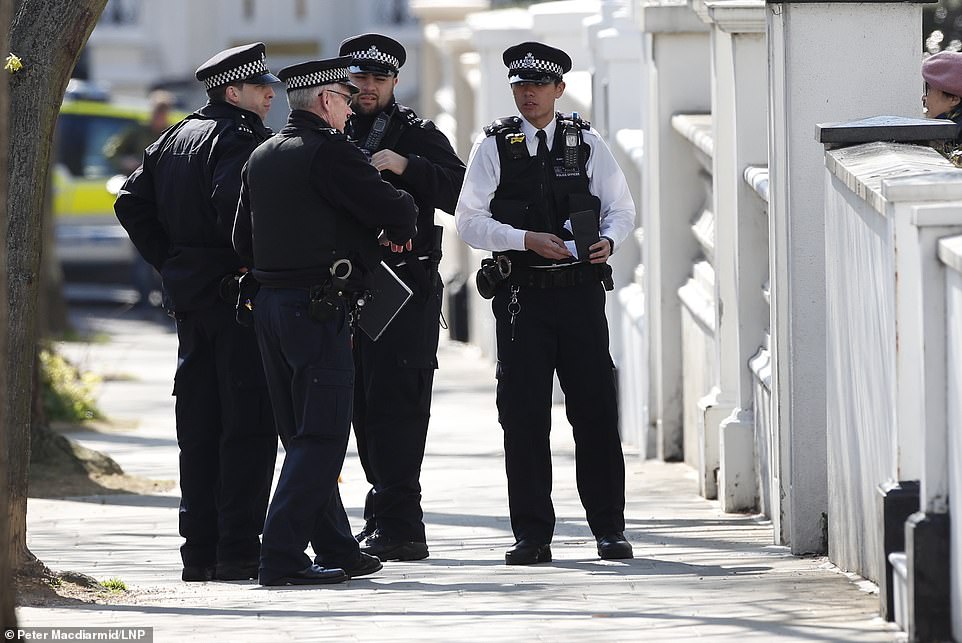 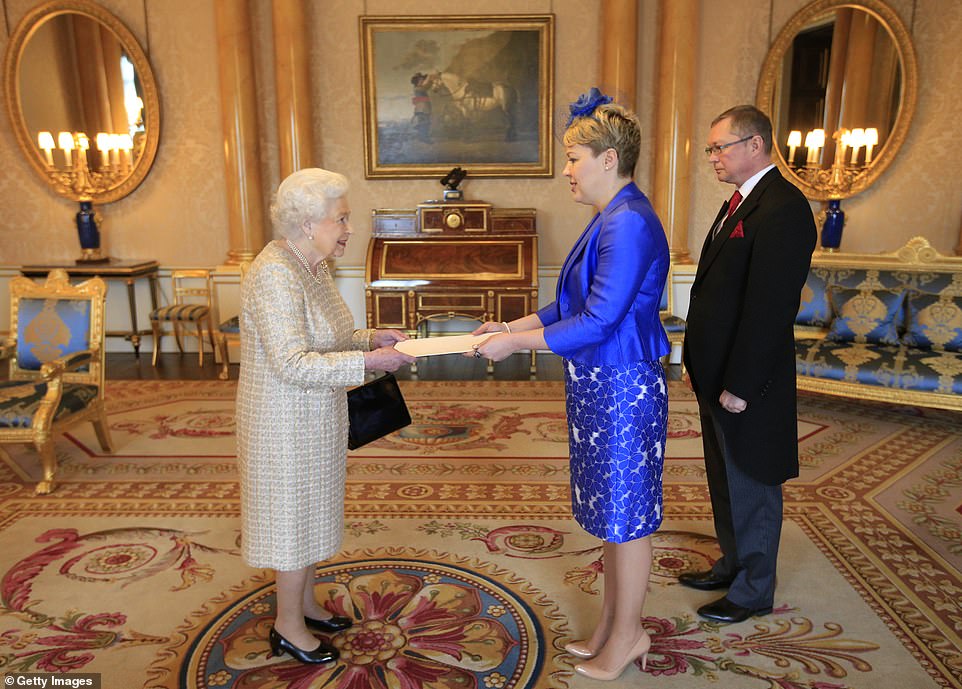 ‘[The shot] got me out, I just went out to see what it was then when I realised what was going on I went back inside.

‘I heard one gunshot, then the crash of the car, then more gun shots and probably seconds later I was outside.’

Another resident, Dan, who lives two doors down, told MailOnline: ‘The Mercedes was sat outside with music blaring for hours – from 7:30ish’

‘I heard shots and I heard screaming, I thought it had to be some crazy on the street.’ 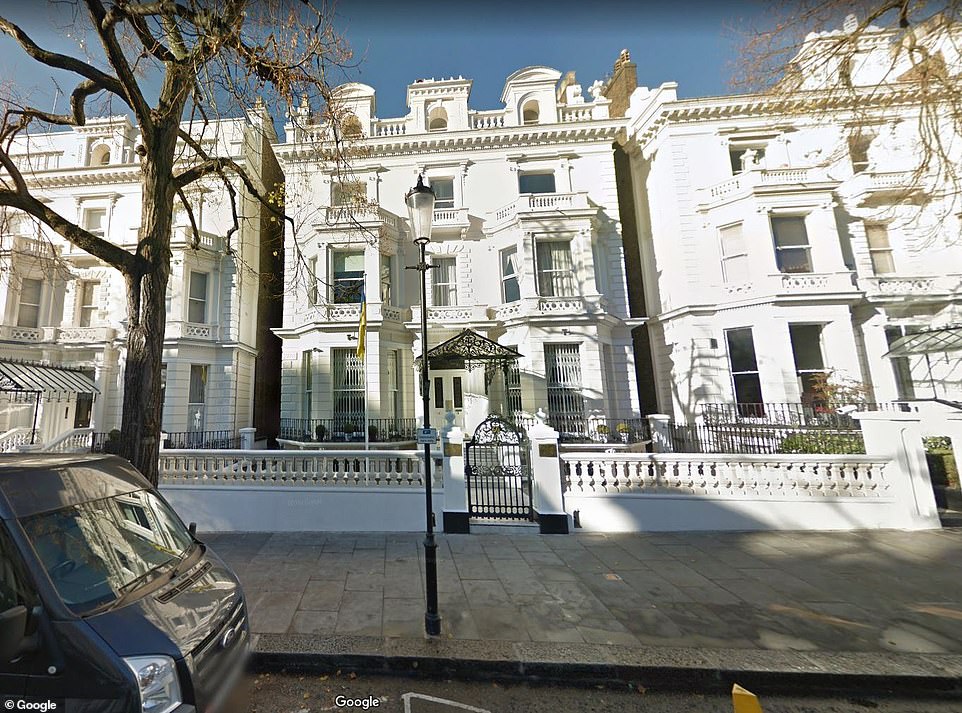 The Ukrainian Embassy is on Holland Park, an affluent area in West London. The ambassador’s car was deliberately targeted by the driver of a silver vehicle 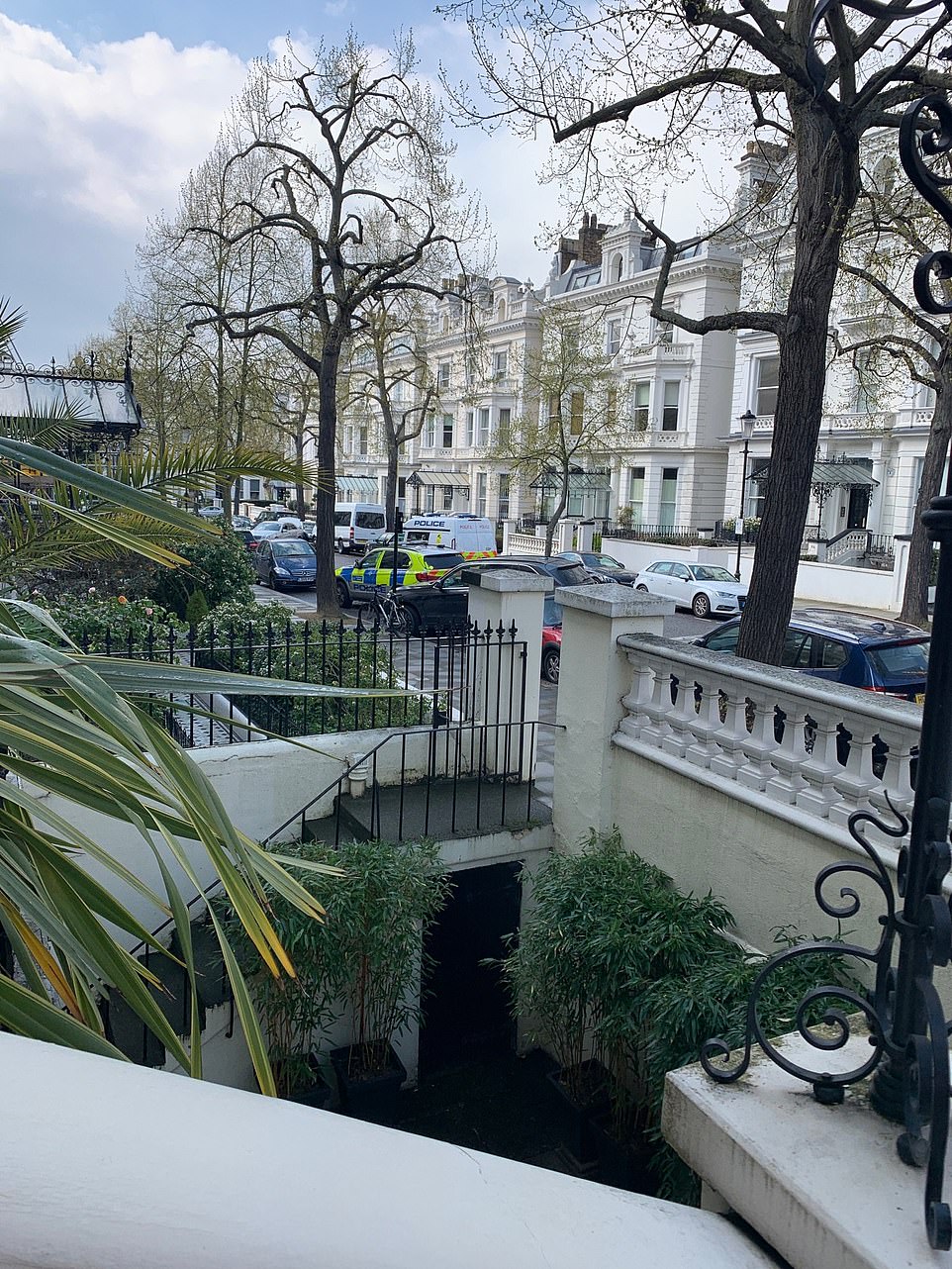 Police attended the scene and took the driver of the car in to custody. It is not known whether the ambassador was in the car at the time of the incident 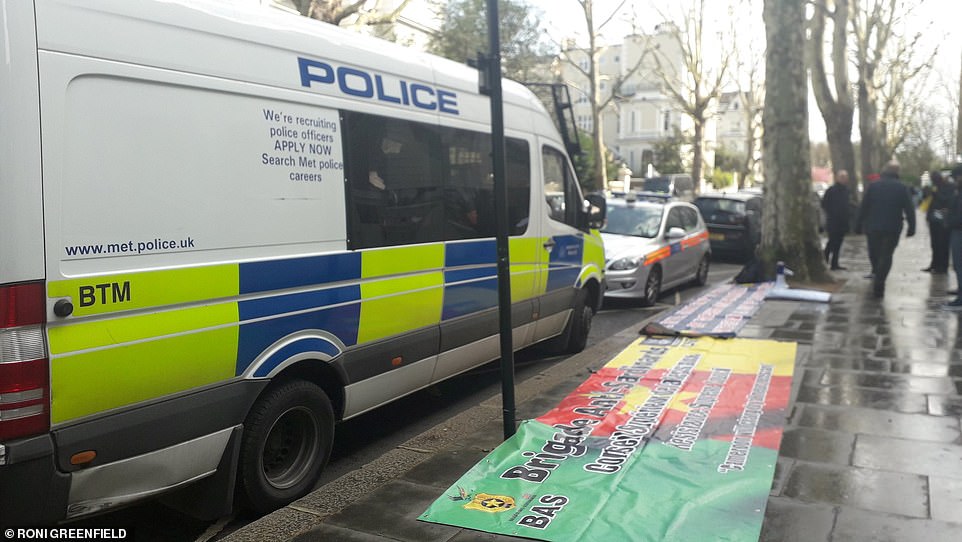 Another neighbour told MailOnline: ‘I thought it was just a protest at the Cameroon embassy because they do it every week’ 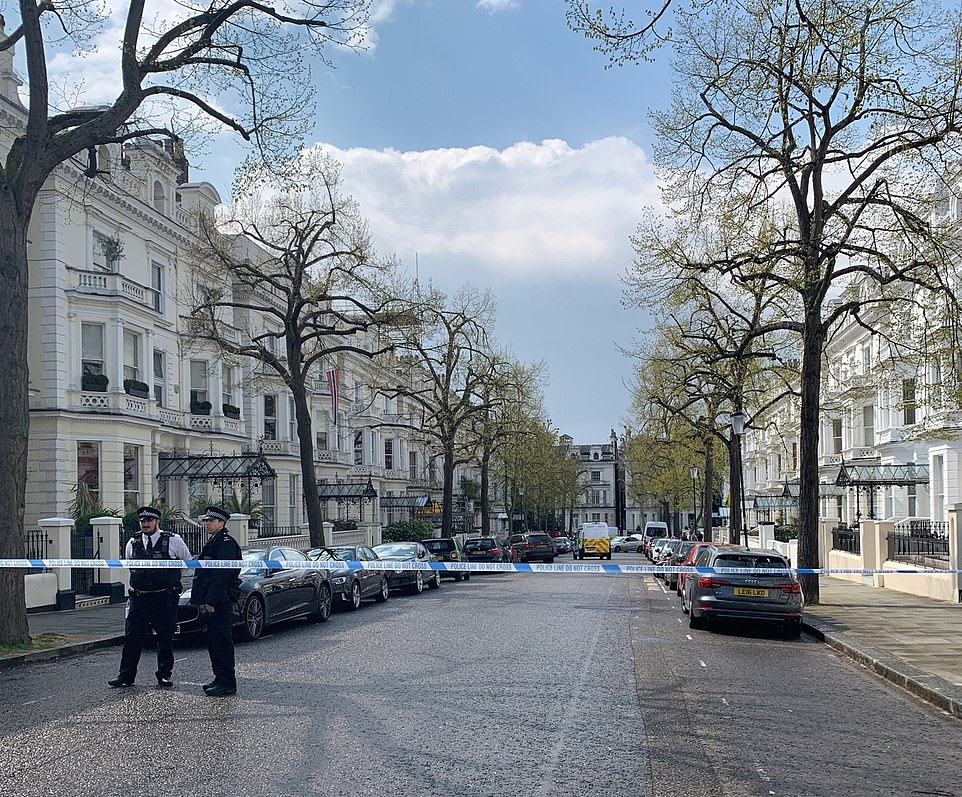 Chief Superintendent Andy Walker, from the Met’s Specialist Firearms Command, said: ‘As is standard procedure, an investigation is now ongoing into the discharge of a police firearm during this incident. While this takes place, I would like to pay tribute to the officers involved this morning who responded swiftly to this incident and put themselves in harm’s way, as they do every day, to keep the people of London safe.’

One witness in the area claimed on social media they had heard up to 10 shots in Holland Park this afternoon.

Photos from the scene show a number of police cars and officers in the area.

Henry Greenfields, who lives nearby, told MyLondon a neighbour had heard shots fired and then seen police return fire.

Another local resident said he had heard ‘seven or eight’ gunshots.

Foreign Office minister Sir Alan Duncan said he was ‘very concerned’ to hear about the incident, and he has spoken with Ukrainian ambassador Natalia Galibarenko.

He tweeted: ‘Very concerned to hear of the incident near the Ukrainian Embassy this morning.

‘I have just spoken to Ambassador Galibarenko @UkrEmbLondon and am glad to hear that no one was hurt.

‘Thanks to the @metpoliceuk for such a swift response.’