Governor Andrew Cuomo gave a stern warning to states which think they will not be badly affected by coronavirus on Wednesday as he revealed the virus has claimed another 391 lives across the state of New York.

Cuomo said the ‘apex’ – when the most will die and become infected – has still not hit and that it will come at the end of April.

He is urging other states to pay attention to what is happening in New York and plan ahead now, saying in a direct appeal to people in more rural states during a press conference in Albany: ‘This is not just a New York problem.

He also urged the NYPD to down on the crowds of ‘selfish, reckless’ people who continue to flout social distancing guidelines by gathering in large groups.

‘The NYPD has got to get more aggressive. Period. If you’re going to force me into a position where I have to mandate it and make it a law, a social distancing law – which I think is absurd – it has to be enforced.

‘How reckless and irresponsible and selfish for people not to do it on their own? What else do you have to know?

‘Who else has to die for you to to understand you have a responsibility in this?’ he fumed. 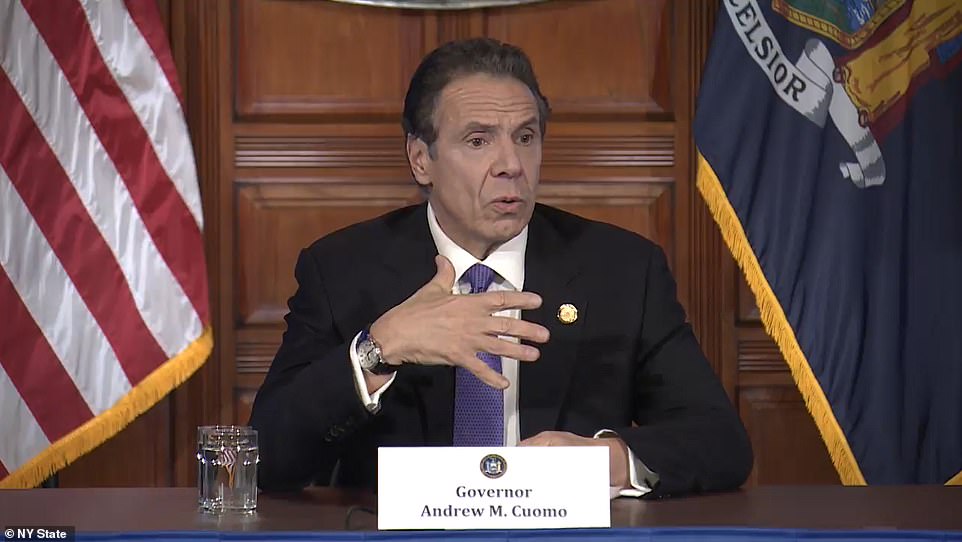 New York Gov. Andrew Cuomo said on Wednesday that other states have to look to New York and ‘see themselves tomorrow’ because coronavirus will hit them soon 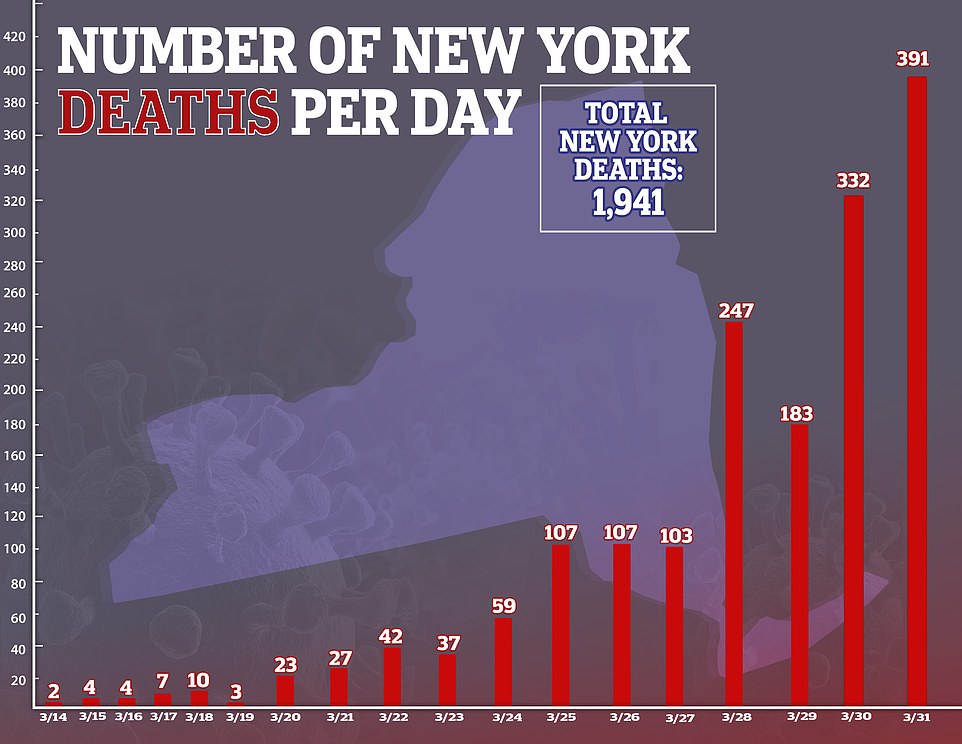 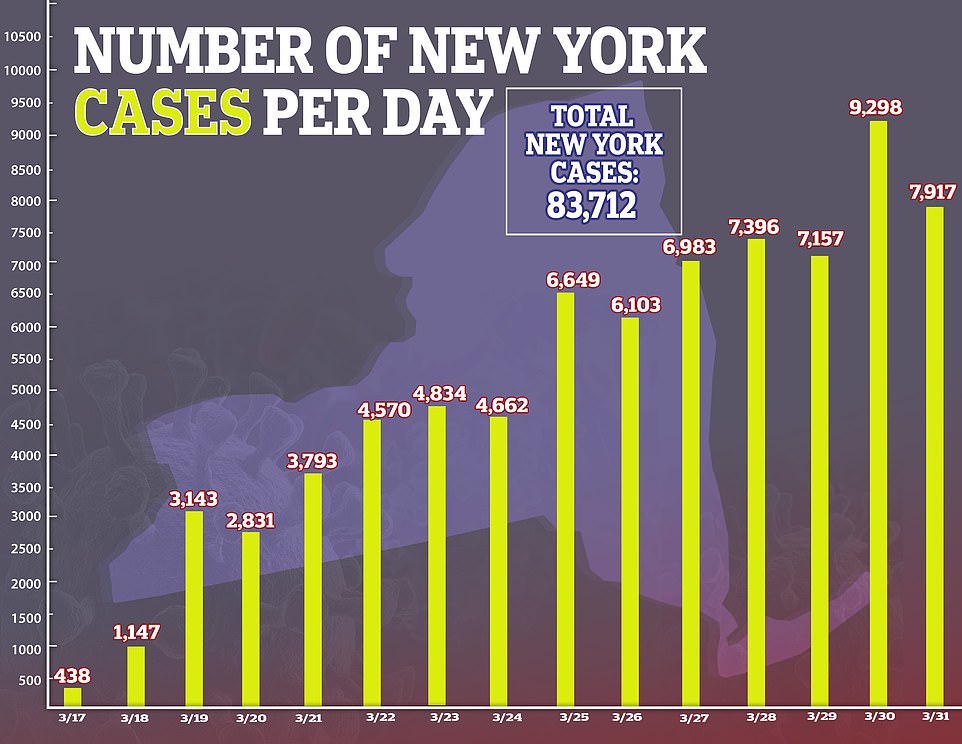 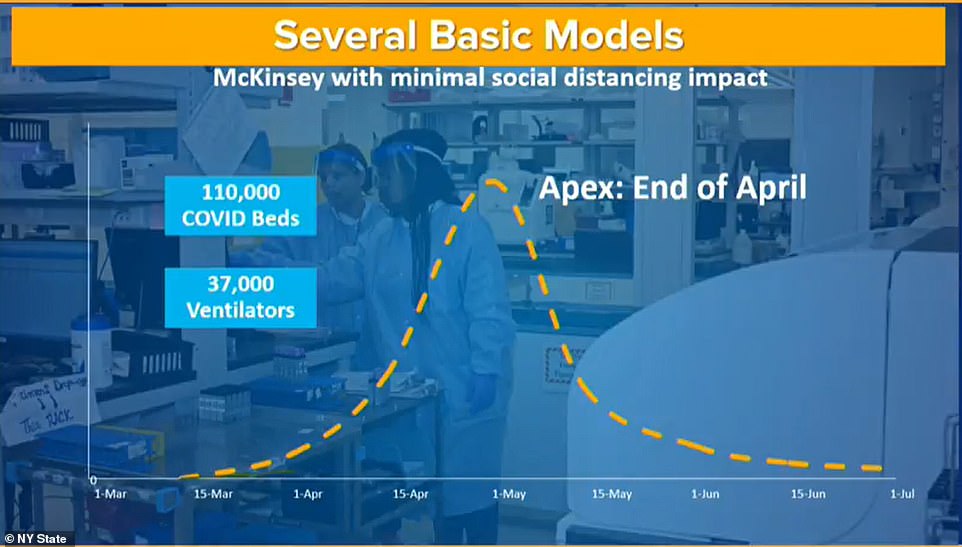 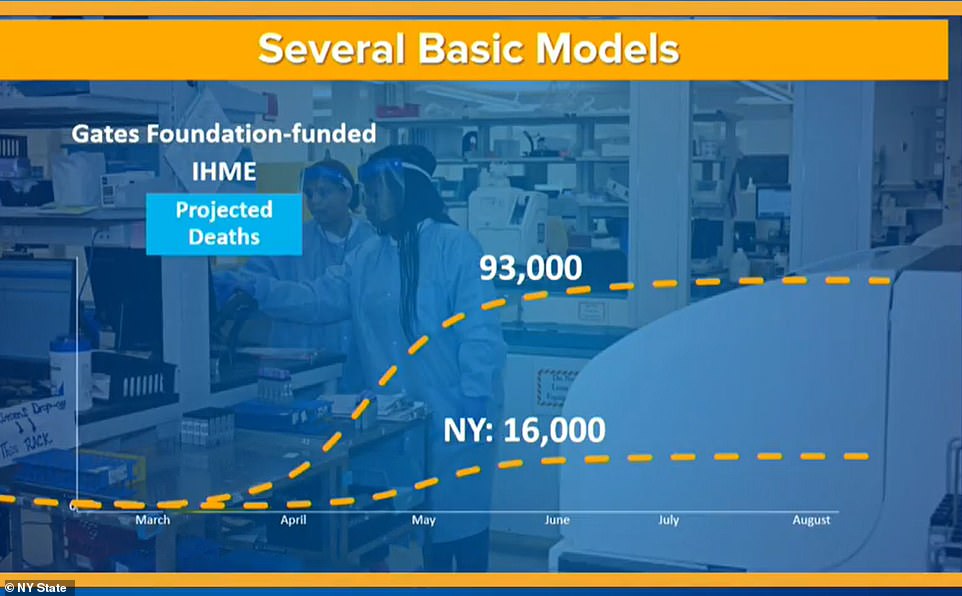 He also pointed to a Gates Foundation model which says 93,000 people in America will die but only 16,000 of them will be in New York. Cuomo said it was proof the virus will claim more lives outside of NY than previously thought, if it is correct

With more than 1,000 NYPD officers now infected with the virus, there are fears the force will soon be depleted of staff.

Cuomo said State Police will fill in for them but that he will also draft police officers from other communities around the state to come and patrol and the city if the NYPD becomes too short-staffed.

He also pointed to research by the Bill Gates Foundation which projects that some 90,000 will die from the virus by the end of the pandemic across the country, but that New York will account for only 16 percent of those deaths.

Given that it is so much further ahead than every other state now, the data suggests the virus will spread rapidly and fatally through other parts of the country, Cuomo warned.

He admits that neither he nor anyone else knows for certain when the pandemic will end and that he is particularly at pains now because his younger brother, CNN anchor Chris Cuomo, has tested positive for the virus.

Chris is quarantining in his basement and is suffering a fever and chills. Gov. Cuomo said on Wednesday that he was ‘frightened’ by the news of Chris’s diagnosis but that it was ‘illustrative’ of how no one is immune from the virus.

‘Anyone can get it. No one can be protected from it. I couldn’t protect my own brother with all he knows and as smart as he is.

‘He couldn’t protect himself. Anyone can get it,’ he repeated.

In the state of New York, there are now 12,226 people in the hospital because of the virus and 3,022 are in intensive care units.

‘We are out of control. We are in a place we have never been in before,’ Cuomo said of the escalating numbers.

He went on to say that once the pandemic ends – whenever it is – life as we knew it will never be the same as it once was. 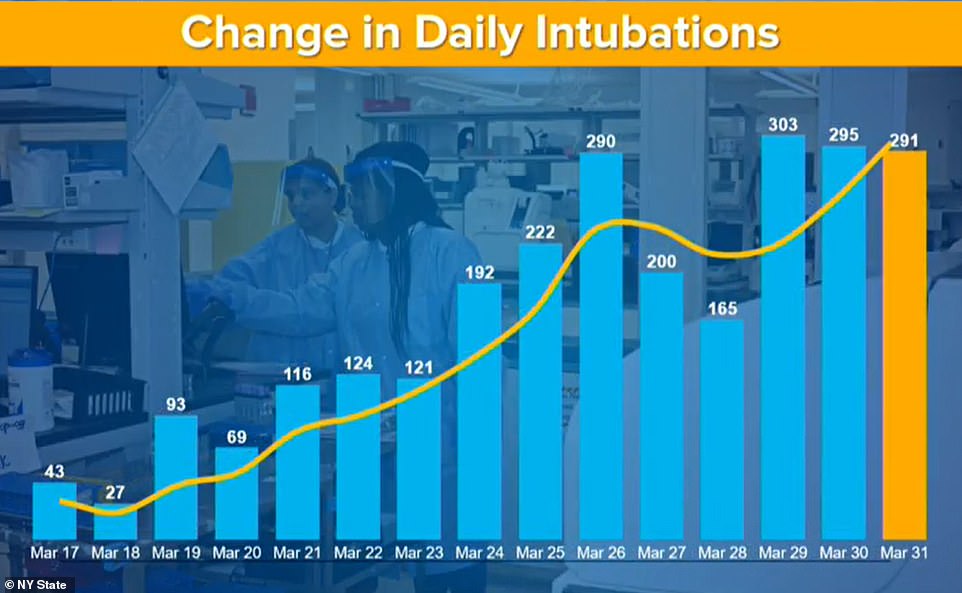 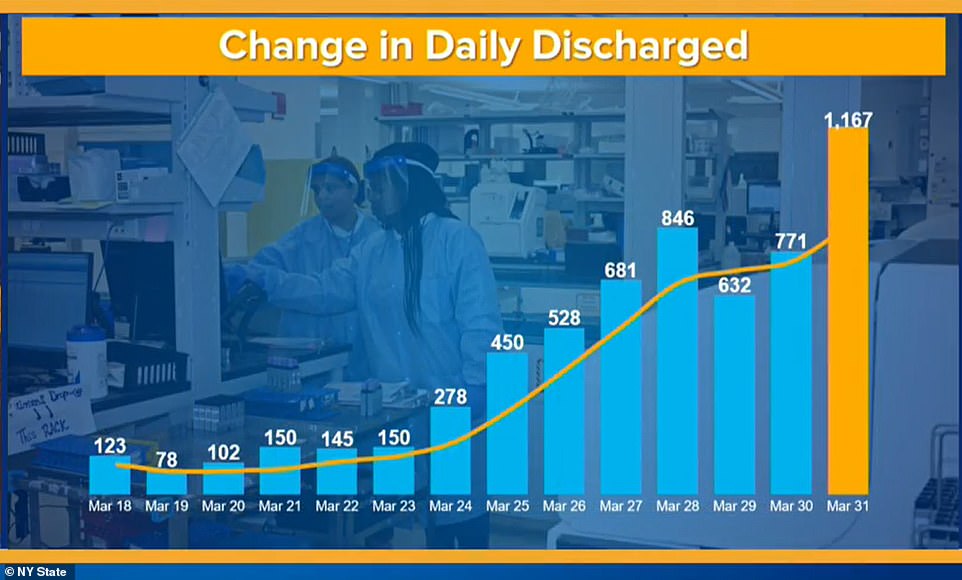 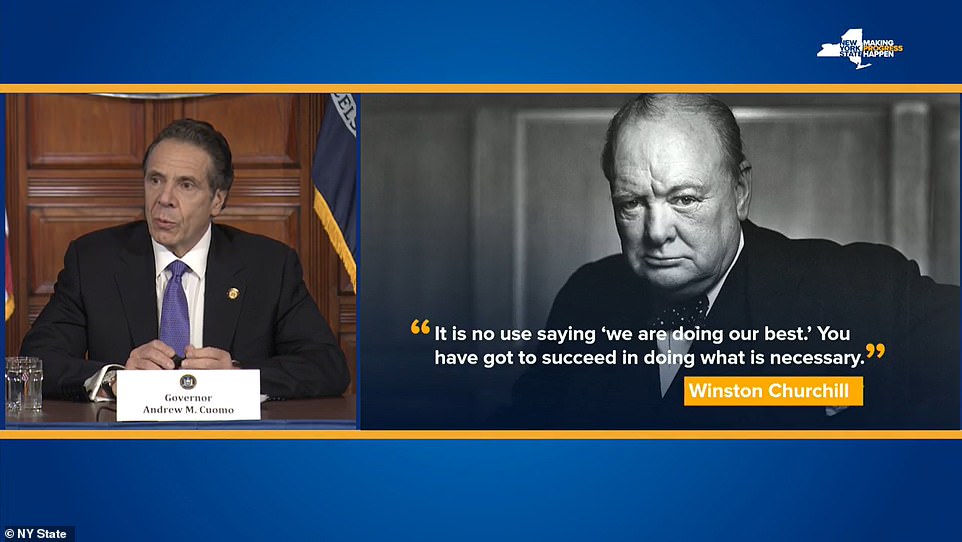 During his press conference, the governor quoted Winston Churchill and said his staff ‘had to succeed’ at overcoming the crisis 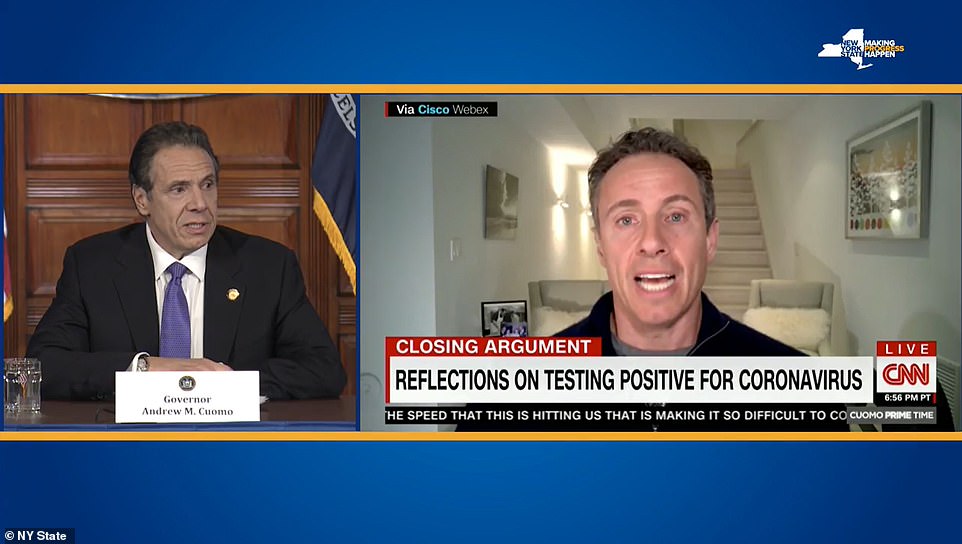 The governor also became emotional speaking about his younger brother, CNN anchor Chris, who has tested positive for the virus 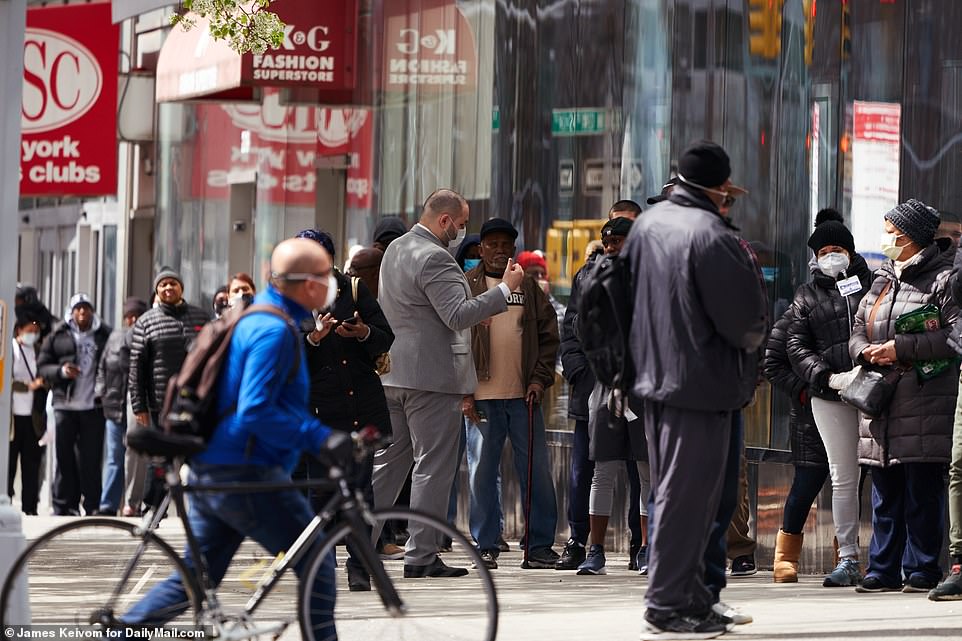 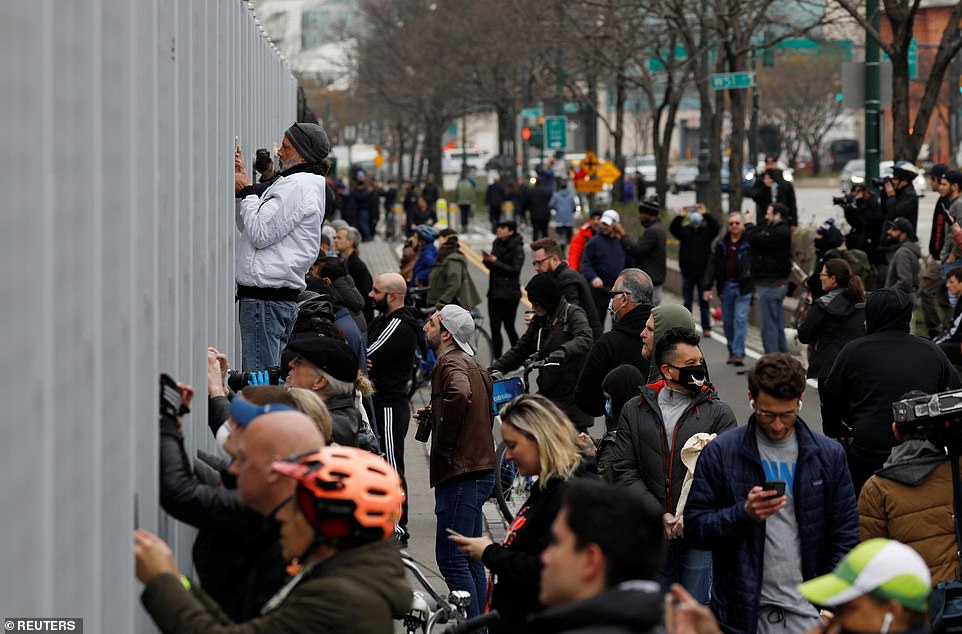 ‘I don’t think we go back to normal. We get back, we get to a new normal. We’re seeing so many facets of society right now. We will be in a different place. Our challenge is to make sure that the transformation and change is positive,’ he said.

He added his worry that people would be afraid to touch or hug one another once they were able to again.

‘You could get wary of intimacy and contact and density – what a terrible thing to live with as a human being. What a cruel torture.

‘Isolate yourself from other people, be afraid of hugging someone.  Just think how emotionally and personally repugnant that concept is,’ he said.

Cuomo says he refers to multiple projections which tell him when the virus will hit.

The Gates Foundation model says it will be at the end of April, which is when the city’s hospitals will become overwhelmed and reach capacity.

‘That means another month of this,’ he said. That model however says that the virus crisis will still be going on in July – far beyond the date Trump has set for national guidelines on social distancing.

Cuomo says he wants to nail down a strategy that both stamps out the virus and helps people get back to work.

The only way that can happen, he says, is through quick and easy testing that people can do at home.

‘Could you still be dealing with the virus and get the economy up and running ad get people out their home? Yes.

‘There are ways to do both; not picking between dollar bill and human life because no one is going to pick dollar bill. My opinion is the best way to do that is to come up with a rapid testing procedure where people can test; they know who’s positive, who’s negative and who can go back to work,’ he said.

He added that by creating rapid and widespread testing, he would be able to get rid of the anxiety surrounding the entire issue.

‘The anxiety of dealing with this day after day after day, when’s it going to end? It’s like a bad groundhog movie.

He also issued a firm order to young people and crowds who continue to gather despite being told to stay at home and only go out when absolutely necessary.

‘Young people must get this message… this can kill young people – rare circumstances – but it can. 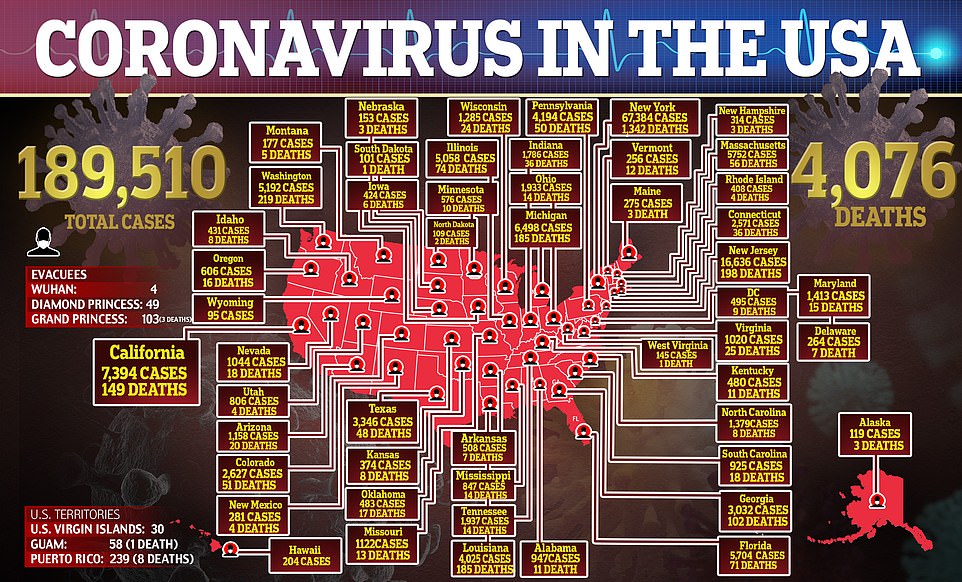 He has closed down all New York City playgrounds but is leaving parks open, meaning children will not be able to gather on the playground structures.

New York City hospitals have not yet hit their capacity. When they do, they will start sending patients upstate.

‘That’s where the enemy either overwhelms our healthcare system or we are able to handle the onslaught of the enemy – the apex is what we are planning for every day,’ he said.

Cuomo also spoke of looking ‘forward’ to how society will eventually recover. ‘

‘Beyond just this immediate situation, we should start looking forward to understand how this experience is going to change us or how it should change us.

‘We’re not going to forget what happened here. The fear and anxiety, that’s not just going to go away,’ he said.

He added that plans should be implemented to ensure the country does not come to a total standstill as it has done due to this pandemic.

‘You can’t figure it out on the fly,’ he said, adding that preparations should be made now for improved tele-medicine and tele-education systems.

Another problem is the fact that the US is having to buy all of the supplies it needs to fight the crisis from China.

‘Why are we shopping in China for basic medical supplies?

Not succeeding at overcoming the virus was, he said, not an option.

‘We have to succeed at it. Government process is very good at saying, “well we’re trying, we’re working on this, we’re doing our best.”‘

Quoting Winston Churchill, he went on: ‘It is no use saying we are doing our best. You have got to succeed in doing what is necessary.’

‘Tad harsh. Handsome, but a tad harsh, but it’s true,’ Cuomo said, adding that he tells his staffers that ‘every day’.

‘This is beyond best efforts. We have to get this done. We have to succeed. Find a way, make it happen. Too much is at stake,’ he said.