As the nation grapples with the coronavirus pandemic that has left thousands dead and hospitals overwhelmed, residents of Miami Beach took advantage of sunny skies and warm weather to jet ski and get tans on yachts.

Some of South Florida’s well-heeled citizens decided to flout stay-at-home orders issued by local governments and take to the waters off the Star Island neighborhood of Miami Beach where they water paddled, fished, and even drank Corona beer.

Several other Miamians in bikinis and tights decided to take advantage of the balmy 80-degree weather to get in some exercise on Sunday.

The images from South Florida make it seem as if there were no national emergency over the mounting toll caused by the spread of the coronavirus.

Florida state officials on Sunday reported an increase in the number of confirmed cases. 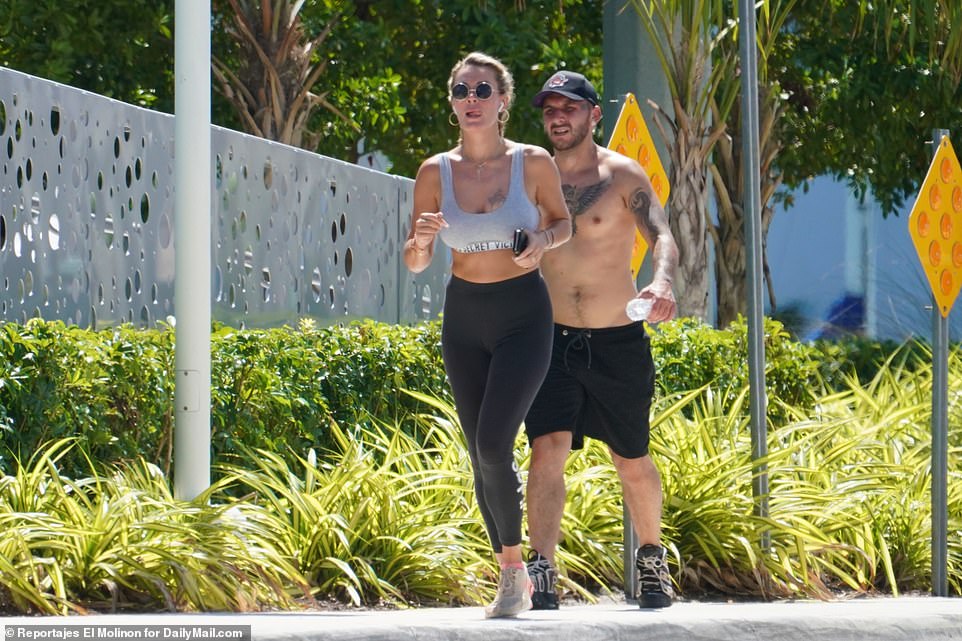 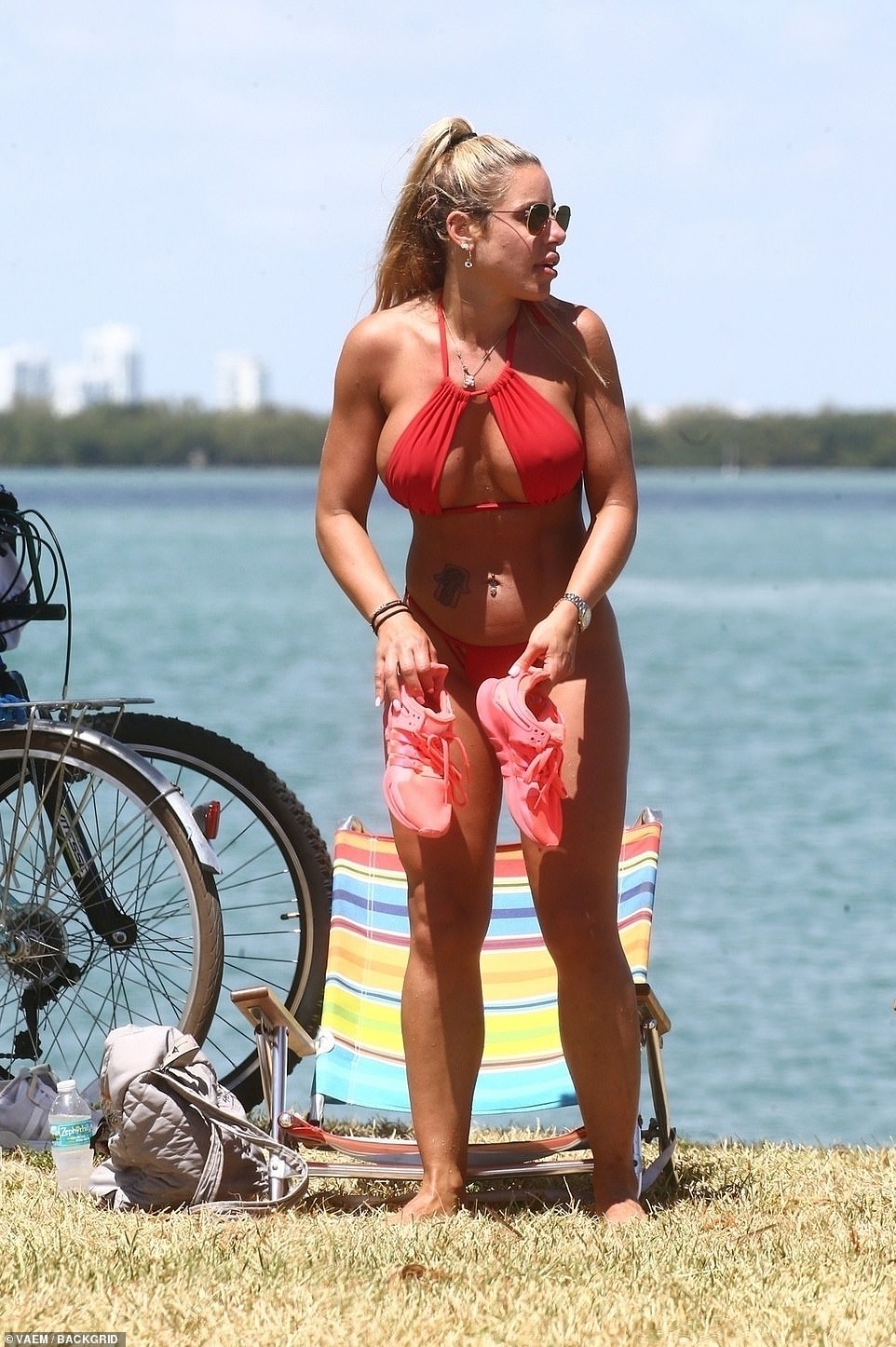 Despite a stay-at-home order issued by local governments throughout South Florida, residents of Miami Beach were out and about on Sunday 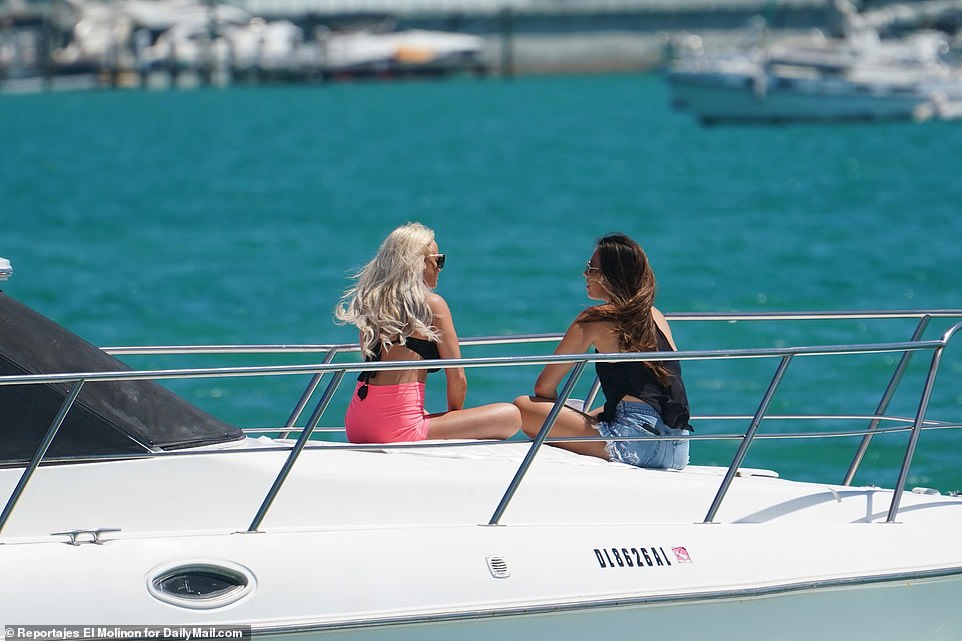 No social distancing for us! These two young women enjoy a nice chat aboard a yacht near Miami Beach’s Star Island neighborhood on Sunday

In total, 4,077 Floridians tested positive for coronavirus. The state has also confirmed positive test cases for an additional 169 non-residents.

Most of those cases have been reported in Miami-Dade County, where 1,192 residents were confirmed to have been infected with the virus.

On Sunday alone, 208 coronavirus cases were reported statewdie. Of those, 71 were from Miami-Dade. The state’s death toll did not change on Sunday.

Broward County has a reported 828 cases of coronavirus. Of those 100 are in hospital being treated.

Earlier on Sunday, it was learned that two medical professionals in Florida died after being infected with coronavirus. 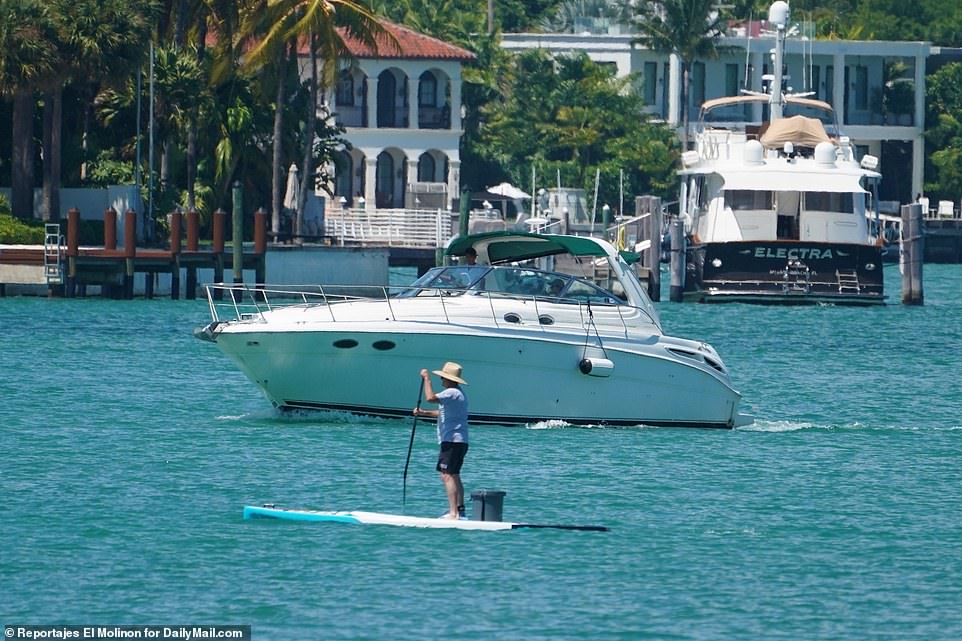 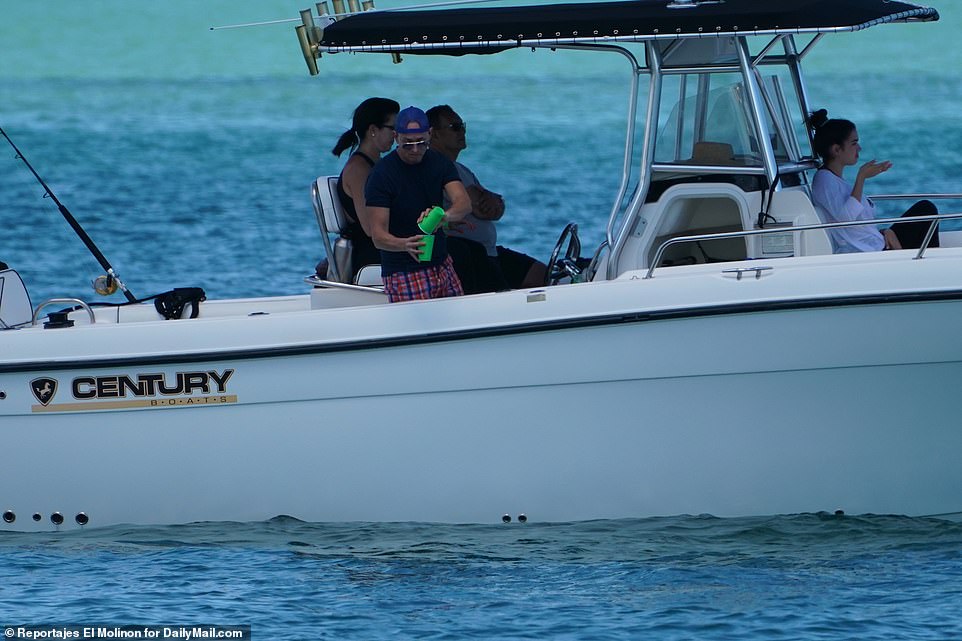 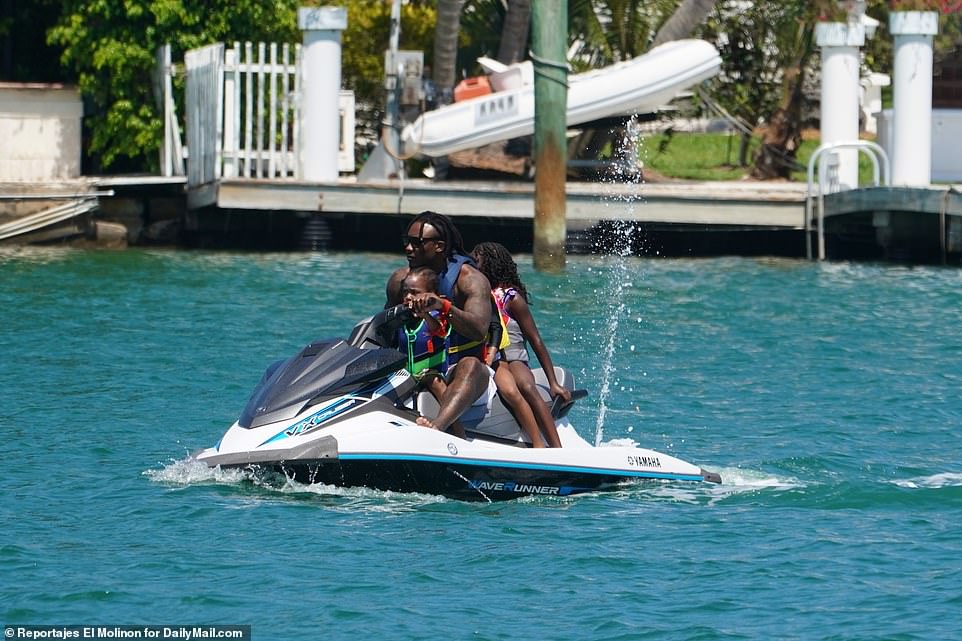 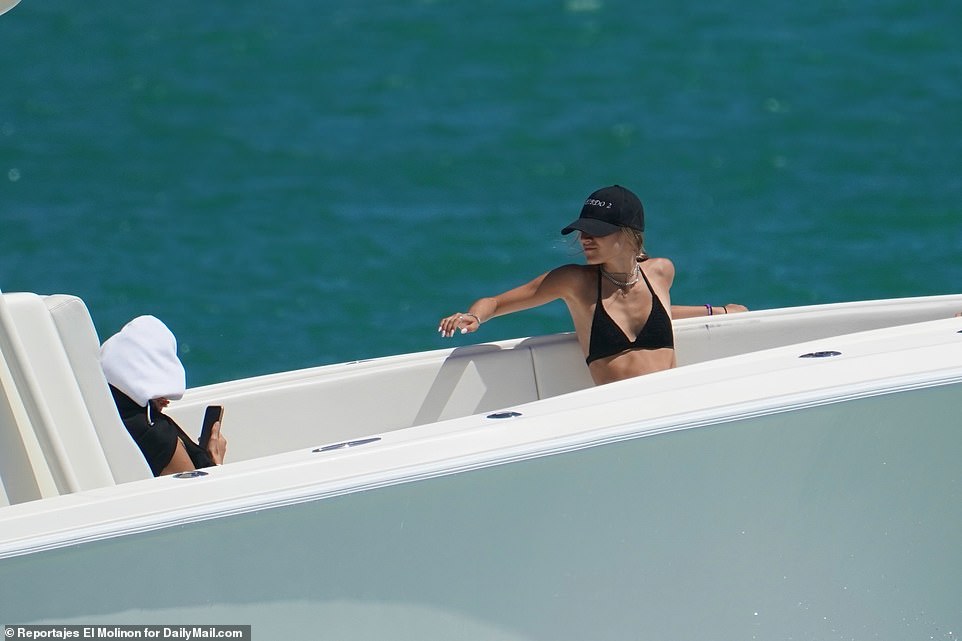 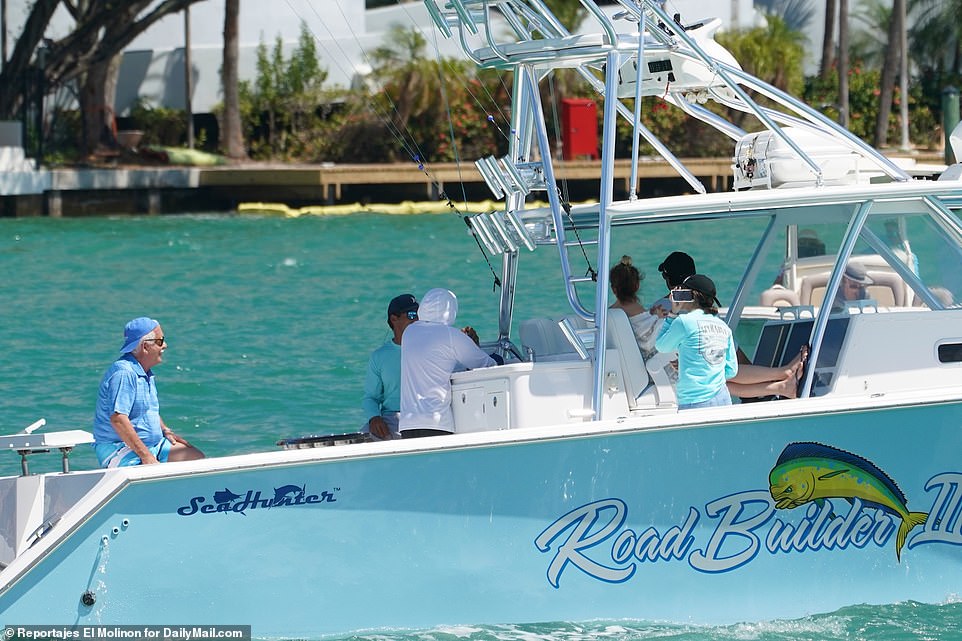 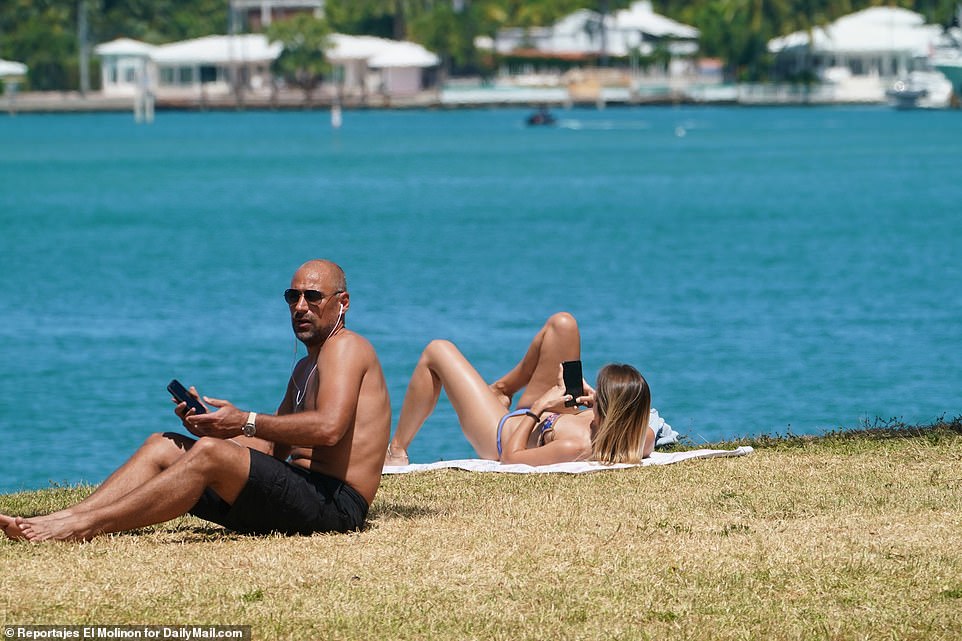 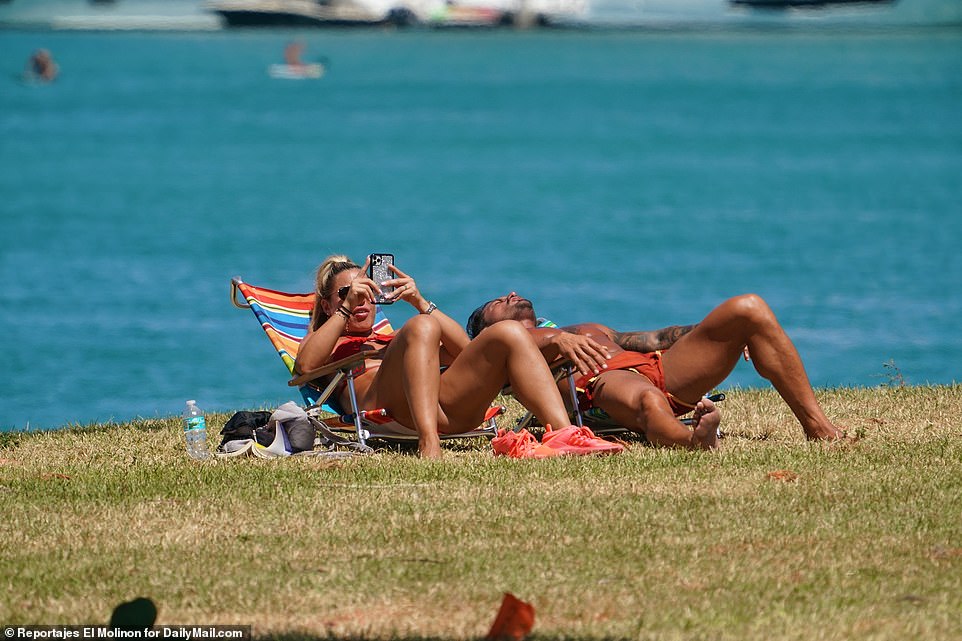 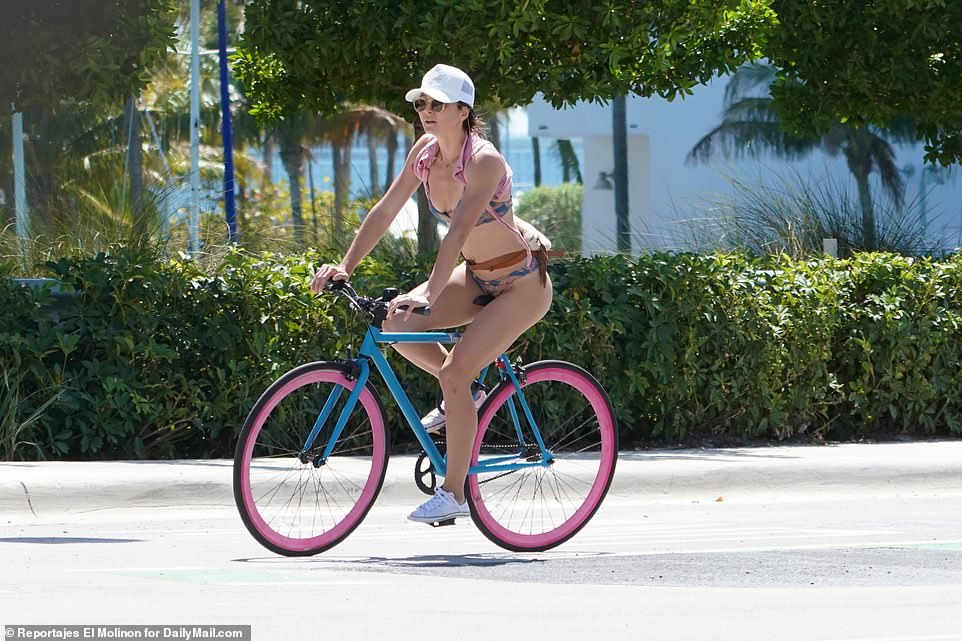 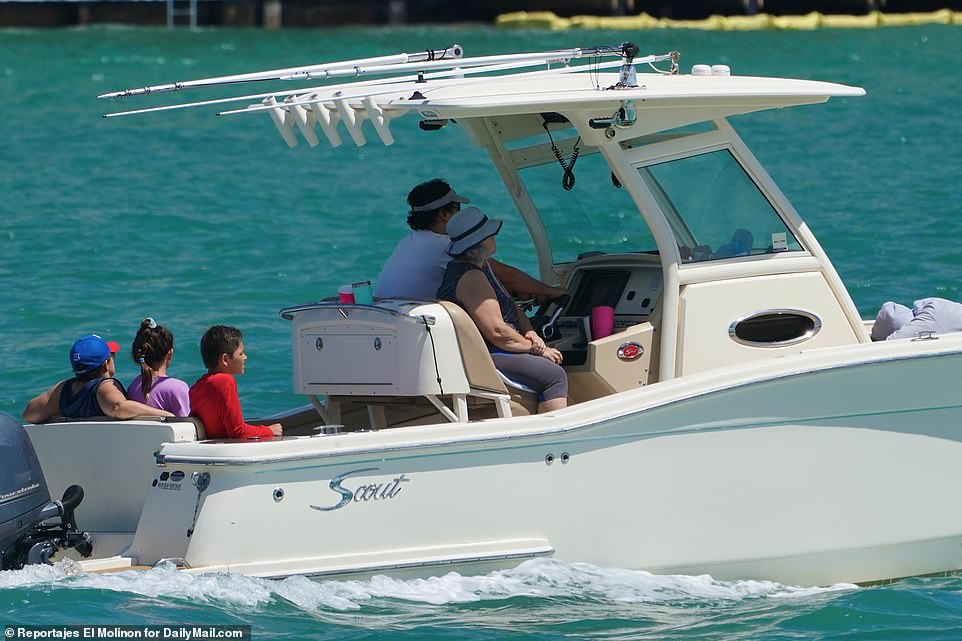 A group of Floridians took their boat into Biscayne Bay on Sunday on what was a warm day with clear, sunny skies 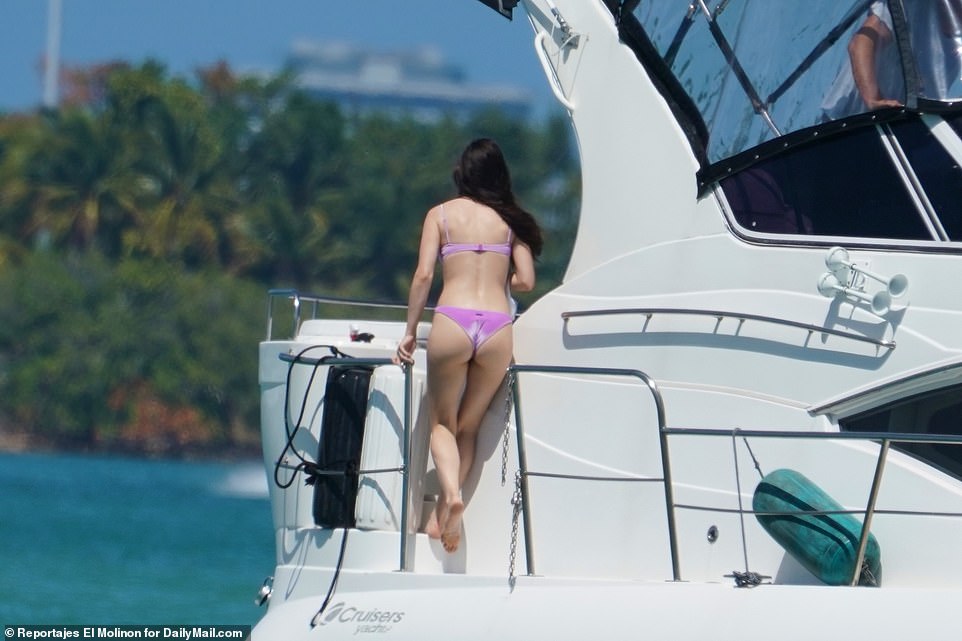 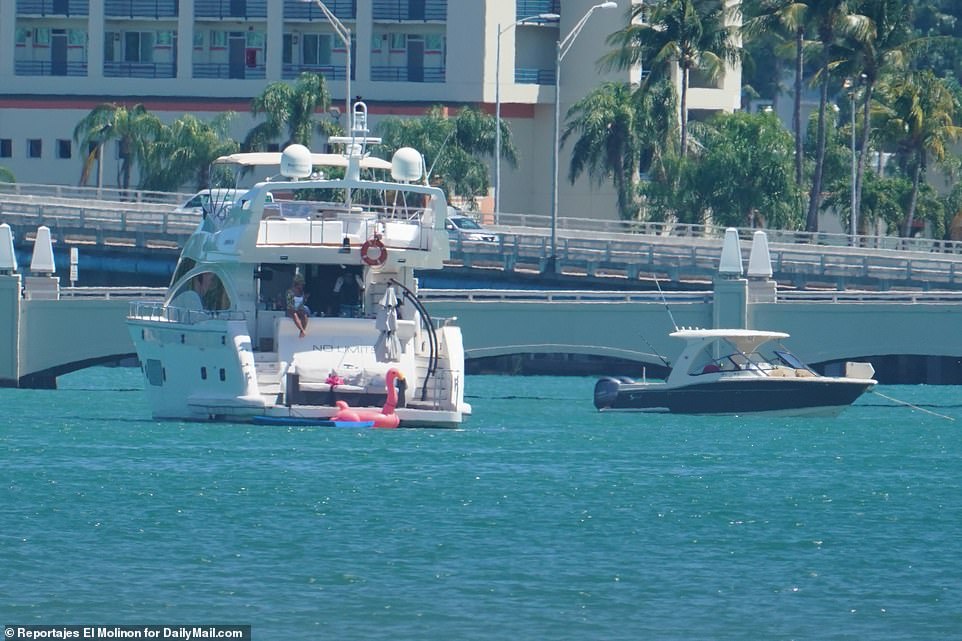 Her death comes four days after the passing of Dr. Alex Hsu, 67, who had worked at Northwest Medical Center in Margate, Florida, and died due to complications of COVID-19 on Tuesday.

Hsu and Ilagan are two of three health care workers who died this past week after being infected with coronavirus.

Their tragic deaths serve as a somber reminder of the dire risks doctors and nurses face in working with coronavirus patients as hospitals report shortages of equipment, testing kits, and health care workers.

Medical experts warn the contagious COVID-19 will continue to spread across the country as Dr. Anthony Fauci, the government’s foremost infection disease expert, predicts the US could see between 100,000 to 200,000 deaths. 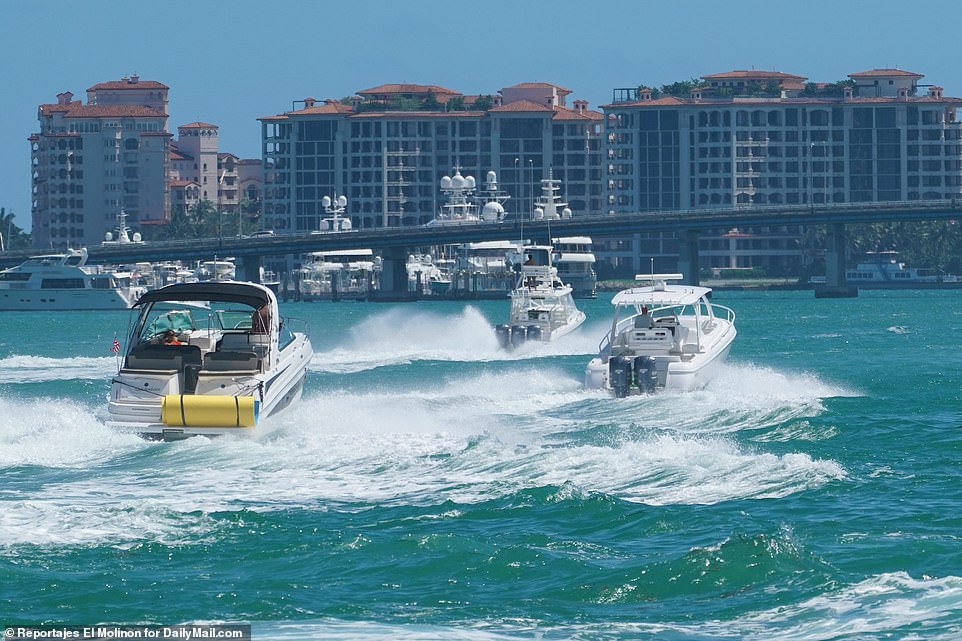 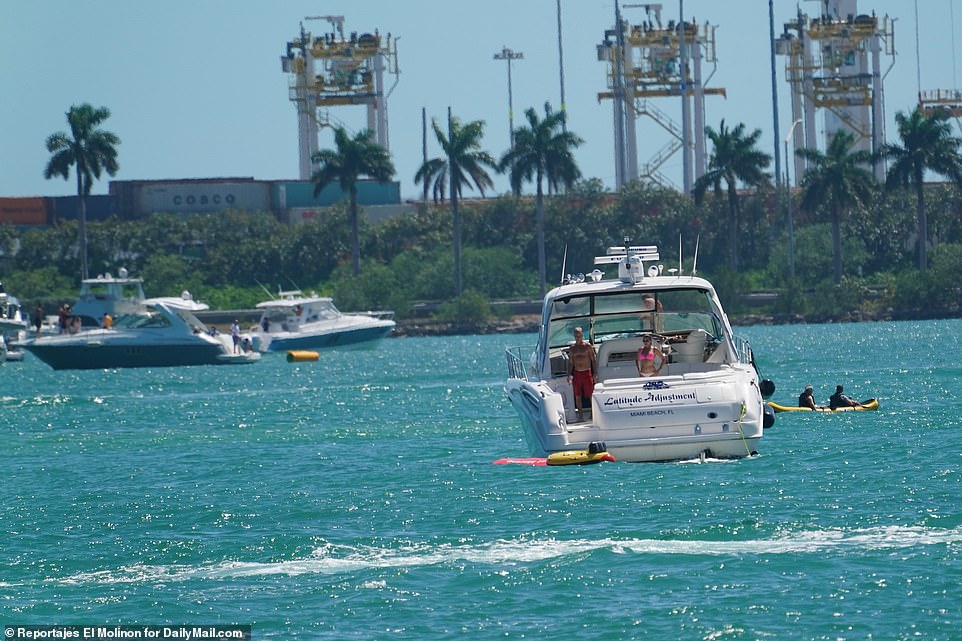 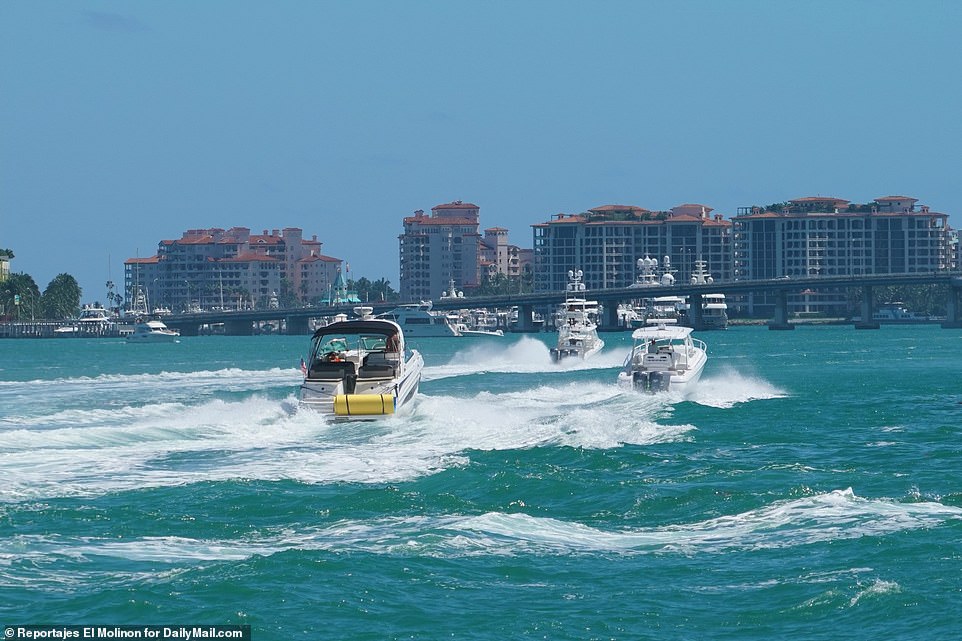 The state of Florida has avoided imposing the same strict closures and lockdowns that other hard-hit states like New York, California, Ohio, New Jersey, Washington, and others have put in place 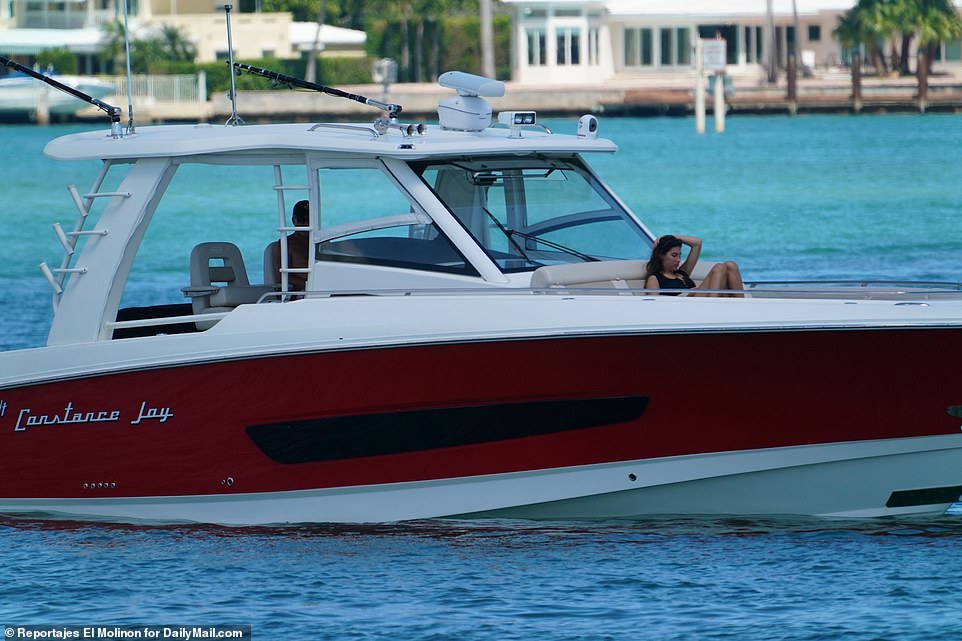 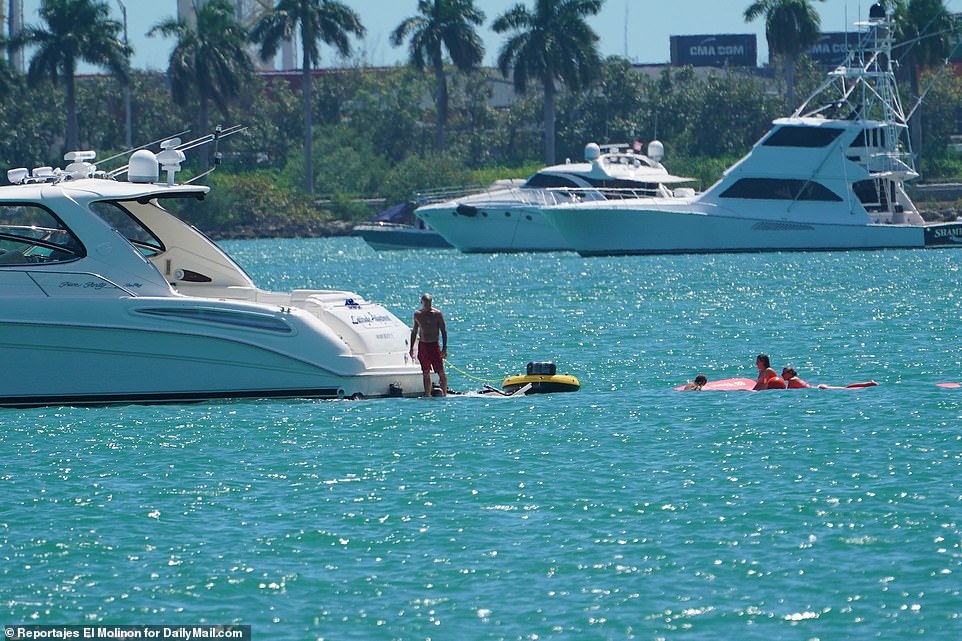 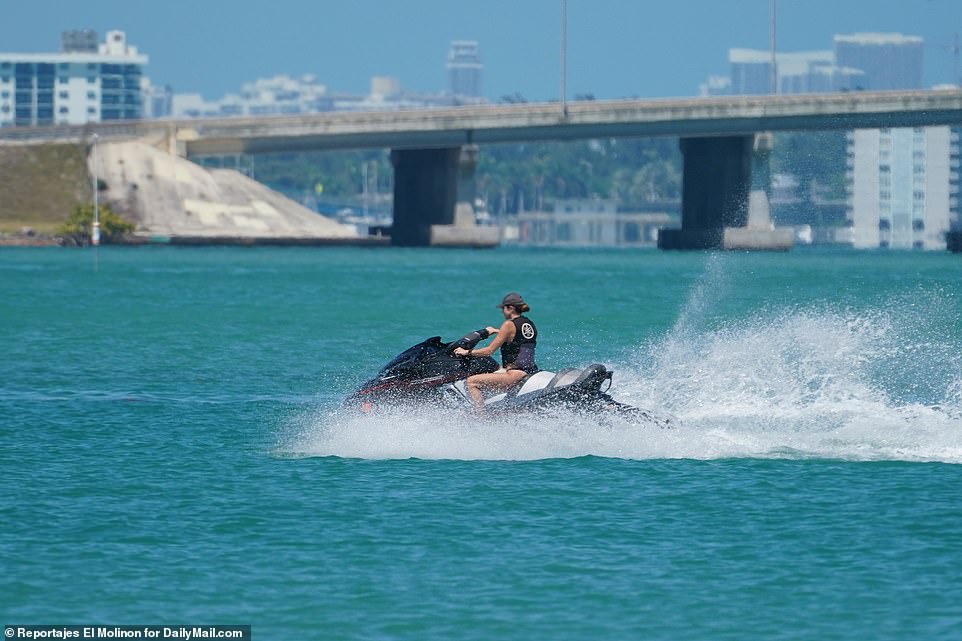 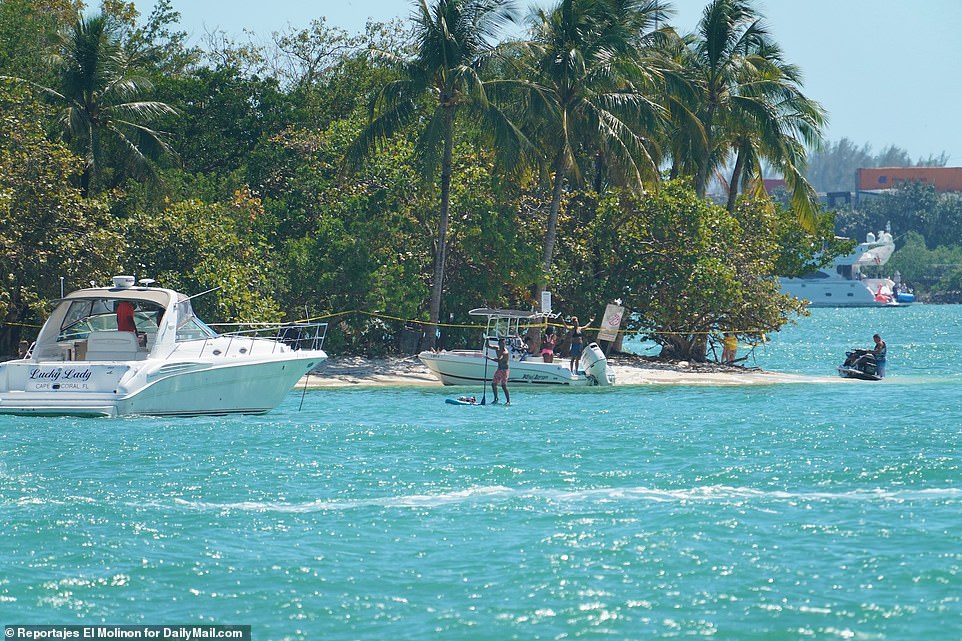 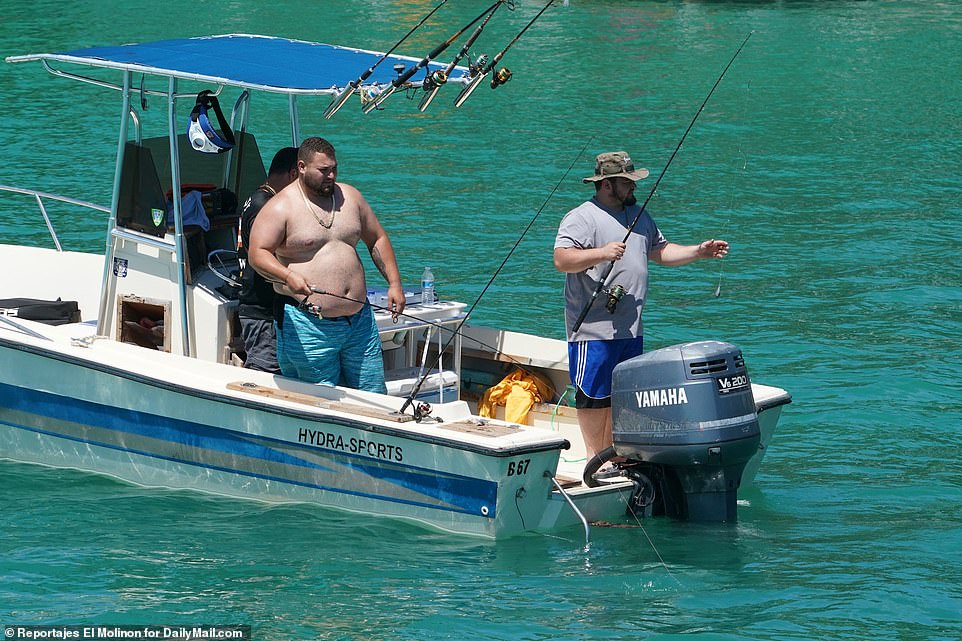 Florida’s governor, Ron DeSantis, has faced mounting criticism at home for his response to the virus.

DeSantis, a Republican, has not imposed a statewide lockdown on businesses as other states have done.

Instead, local governments have imposed their own restrictions.

Several cities and counties throughout South Florida have imposed curfews.

DeSantis was the governor who reportedly urged his ally, President Trump, to impose a mandatory quarantine on New York, New Jersey, and Connecticut.

New York, the epicenter of the coronavirus pandemic in the US, makes up nearly half of all cases nationwide.

Trump eventually abandoned the idea after governors balked and legal scholars questioned whether it was constitutional.

Florida has imposed restrictions on visitors from New York as well as another emerging hotspot, Louisiana.

Florida orders arrivals from Louisiana and New York into quarantine

DeSantis on Friday ordered anyone arriving from Louisiana to self-quarantine like those from New York in a bid to blunt the coronavirus pandemic.

DeSantis said he is expanding his quarantine order to include Louisiana after officials in the lightly hit Panhandle worried people will flee New Orleans as the number of positive tests there climb.

It is about a three-hour drive from New Orleans to Pensacola and DeSantis said the Florida Highway Patrol and sheriff’s deputies will set up checkpoints to screen cars from Louisiana.

The order requires anyone coming from Louisiana to isolate themselves for two weeks under threat of a 60-day jail sentence.

Earlier this week he issued identical restrictions on visitors from New York, New Jersey and Connecticut.

‘New Orleans is having a lot of problems — they may not be quite as widespread as New York City,’ the governor said.

‘There was a concern from the Panhandle that this could impact them. They are working hard to keep their rates low and we don’t want to add any problems to them.’ 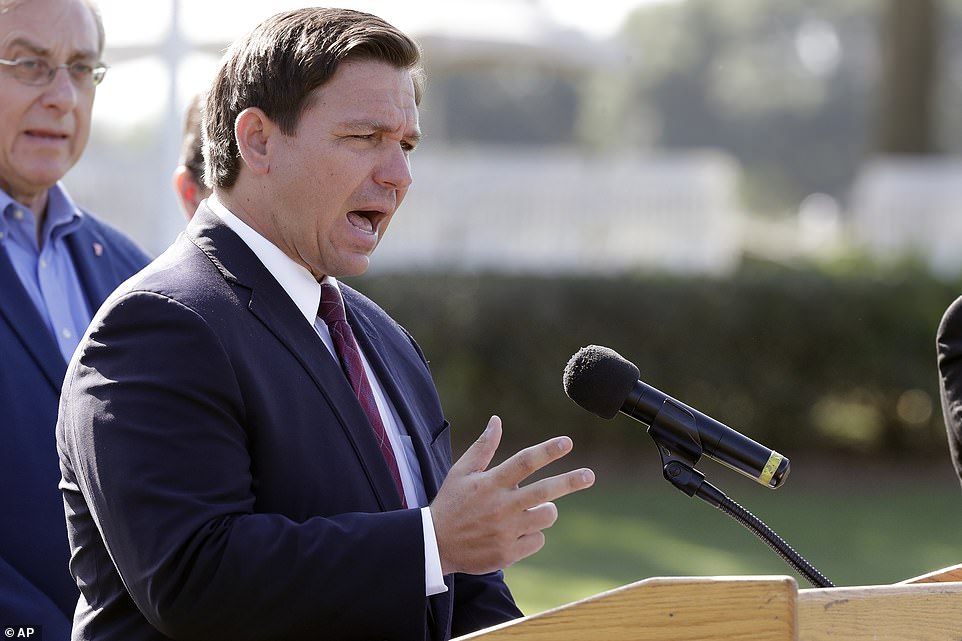 ‘I’m not going to second guess or criticize what other governors are doing,” Edwards, a Democrat, said Friday.

DeSantis also said he will issue an order barring companies like Airbnb from renting homes and rooms to vacationers for two weeks. The ban will not affect hotels or motels.

Airbnb said in a statement that it is working with the state to provide housing for medical workers.

Despite criticism, DeSantis has refused to issue a statewide lockdown limiting residents’ movements that states like California, New York and Illinois have done.

Instead, he has preferred to let local governments decide.

Restrictions are tight in South Florida, central Florida and the Tampa Bay area, but relatively light in the sparsely populated Panhandle.

He has ordered some statewide measures such as closing bars and gyms and limiting restaurants to takeout and delivery.

State parks have been closed.

The park closed in mid-March with plans to reopen next week, but Disney said Friday it and California’s Disneyland would remain closed.

Disney said Friday it would continue to pay its tens of thousands of hourly workers through April 18.

Universal-Orlando has said it will remain closed until at least April 19. 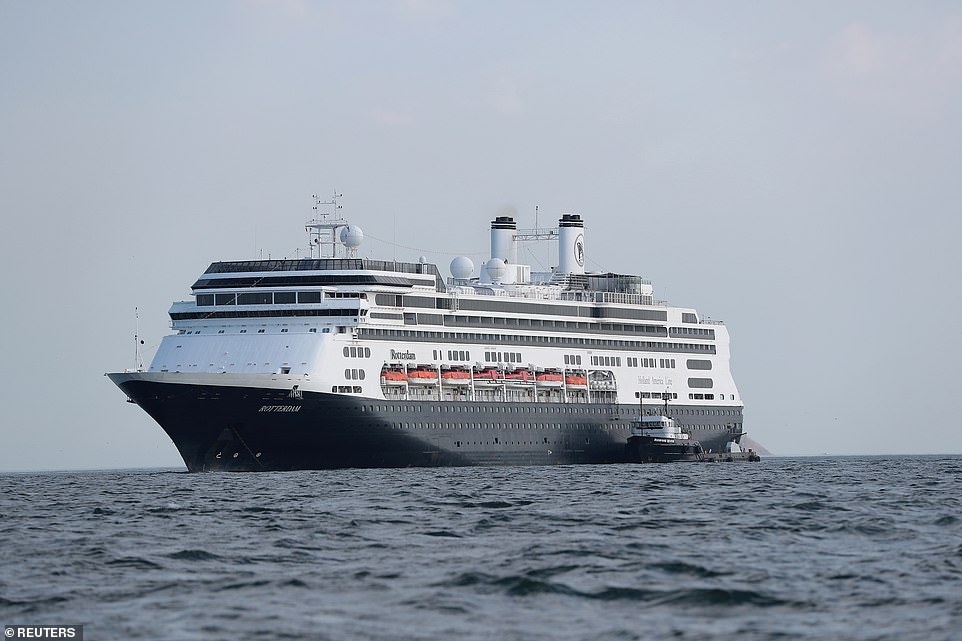 An offshore supply vessel is seen next to the cruise ship MS Rotherdam, which brought supplies and Covid-19 test kits to the MS Zaandam, where four passengers died. The ship is seen above on Friday off the coast of Panama City

Also in Florida, at least a dozen police officers and deputies have tested positive and dozens more have self-quarantined as they await test results, including 40 deputies from Palm Beach County.

‘The Miami Beach cases, they got it from spring break, kind of like New Orleans with Mardi Gras,’ said Robert Jenkins, president of the Florida State Lodge of the Fraternal Order of Police union.

He said that without masks, the officers are trying to keep their distance but still must do their jobs.

The union represents some 22,000 officers.

Meanwhile, four people have died aboard a cruise ship bidding to get to Fort Lauderdale as 130 others have exhibited symptoms of possibly infection.

Holland America said in a statement Friday the passengers died aboard the Zaandam after Chile refused it permission to dock last week.

The Zaandam was off Central America’s Pacific Coast on Friday, awaiting permission to transit the Panama Canal in hopes of reaching Florida. 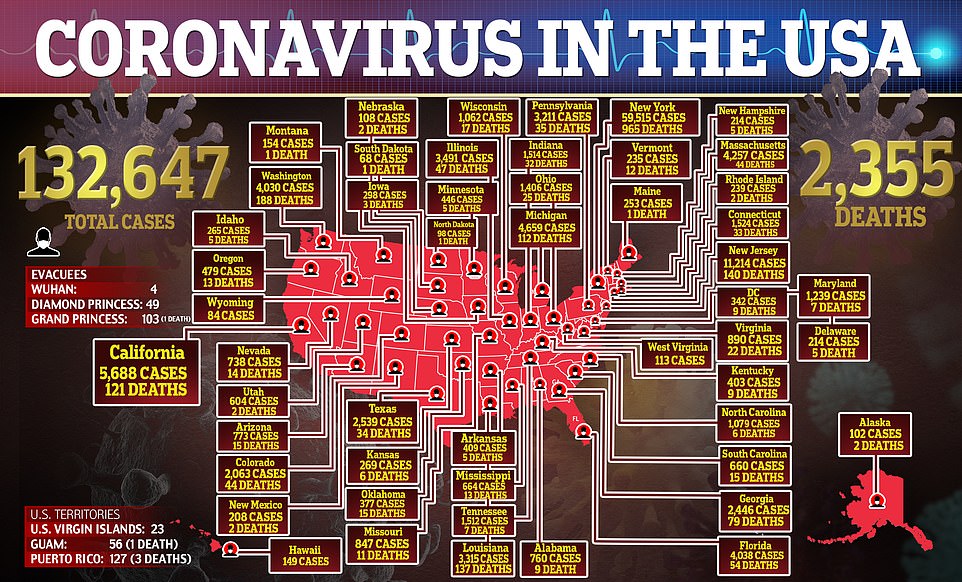 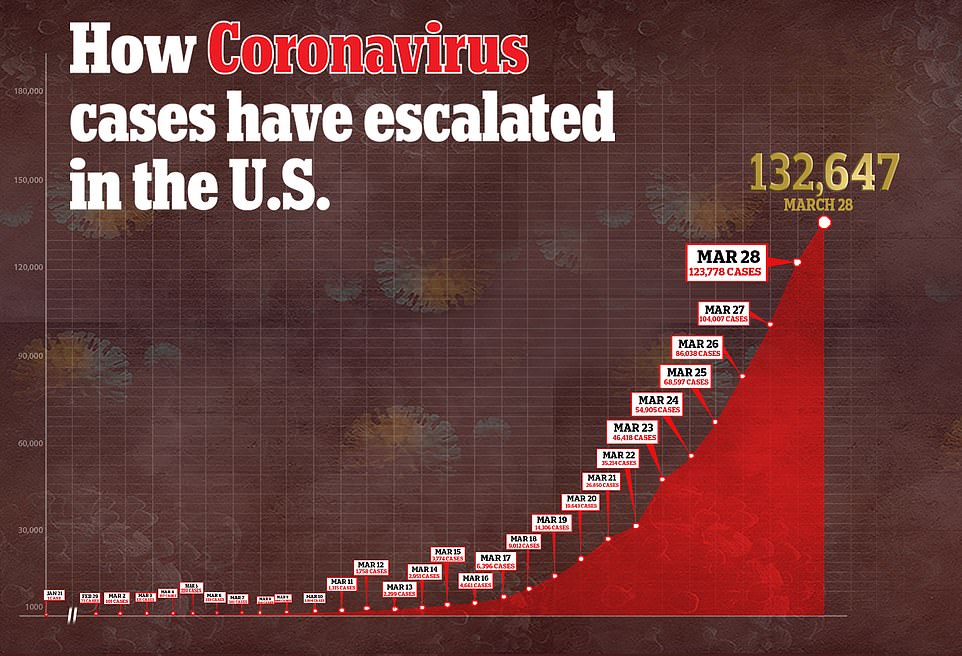 Holland America did not specify that the four died of coronavirus, but says more than 130 passengers and crew have possible symptoms.

At least two cases have been confirmed.

The ship has four doctors and four nurses to treat 1,243 passengers and 586 crew members.

The canal’s administration said Friday the ship will not be allowed through if anyone aboard has been diagnosed with COVID-19 as its employees must board during its passage. The cruise line has been evacuating some passengers to a sister ship.

The ship left Argentina on March 7.

Broward County is debating whether to let the ship dock at its Port Everglades. The cruise line is owned by Miami-based Carnival Corp.

For most people, the new coronavirus causes mild or moderate symptoms, such as fever and cough.

For some, especially older adults and people with existing health problems, it can cause more severe illness, even death. The vast majority of people recover.