This time around, Google is doing something intriguing. It added a speaker and microphones to the individual Points, so they now double as Google Homes. The Points use the same audio setup as the Nest Mini, which the company also unveiled today. But because the Points have taller bodies than the Nest Mini, they have larger chambers for sound to resonate, which should mean better quality audio. The Points sounded fuller and louder than the Nest Mini when I listened to the same song on both devices at a recent briefing.

You can also talk to the Points to ask Google Assistant for things like the weather, your schedule and to control your smart home devices — basically everything you’d do with the regular Assistant-enabled speaker. With Nest WiFi, you can also ask Assistant some network-specific questions like “What’s my internet speed” or to pause the connection for specific devices. That latter command comes in handy if you’re dealing with misbehaving children or guests, for example.

If you have a smart display in your house, you can ask Assistant to help your guests connect to your WiFi, and it will display a QR code. Your visitors can scan that and get on your network without having to enter a password. Handy. 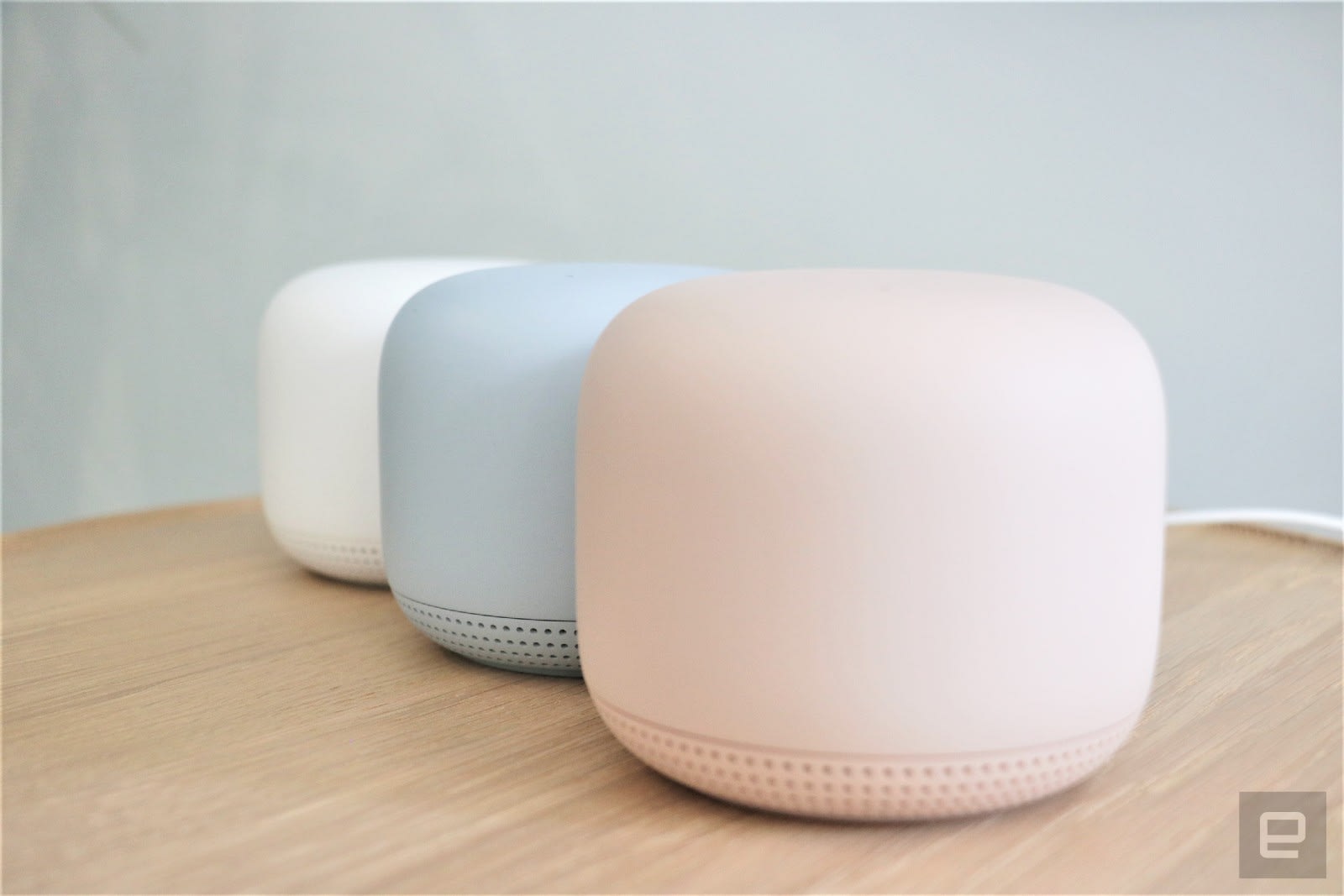 Each Point also features what Google Nest product lead for connectivity Sanjay Noronha called an “underglow light.” This illuminates when you’re talking to the speaker and is there to indicate that Assistant is listening. If that makes you feel uneasy, you can also turn off the mics with a switch near the Point’s base.

One of the highlights of the Google WiFi system three years ago was how its companion app made setting up your network super easy. You could create temporary guest networks, pause connections to specific devices, share passwords with visitors or prioritize specific machines. The new Nest WiFi has all these features too, along with the ability to set up WiFi groups, blacklist websites and set schedules for your kids. 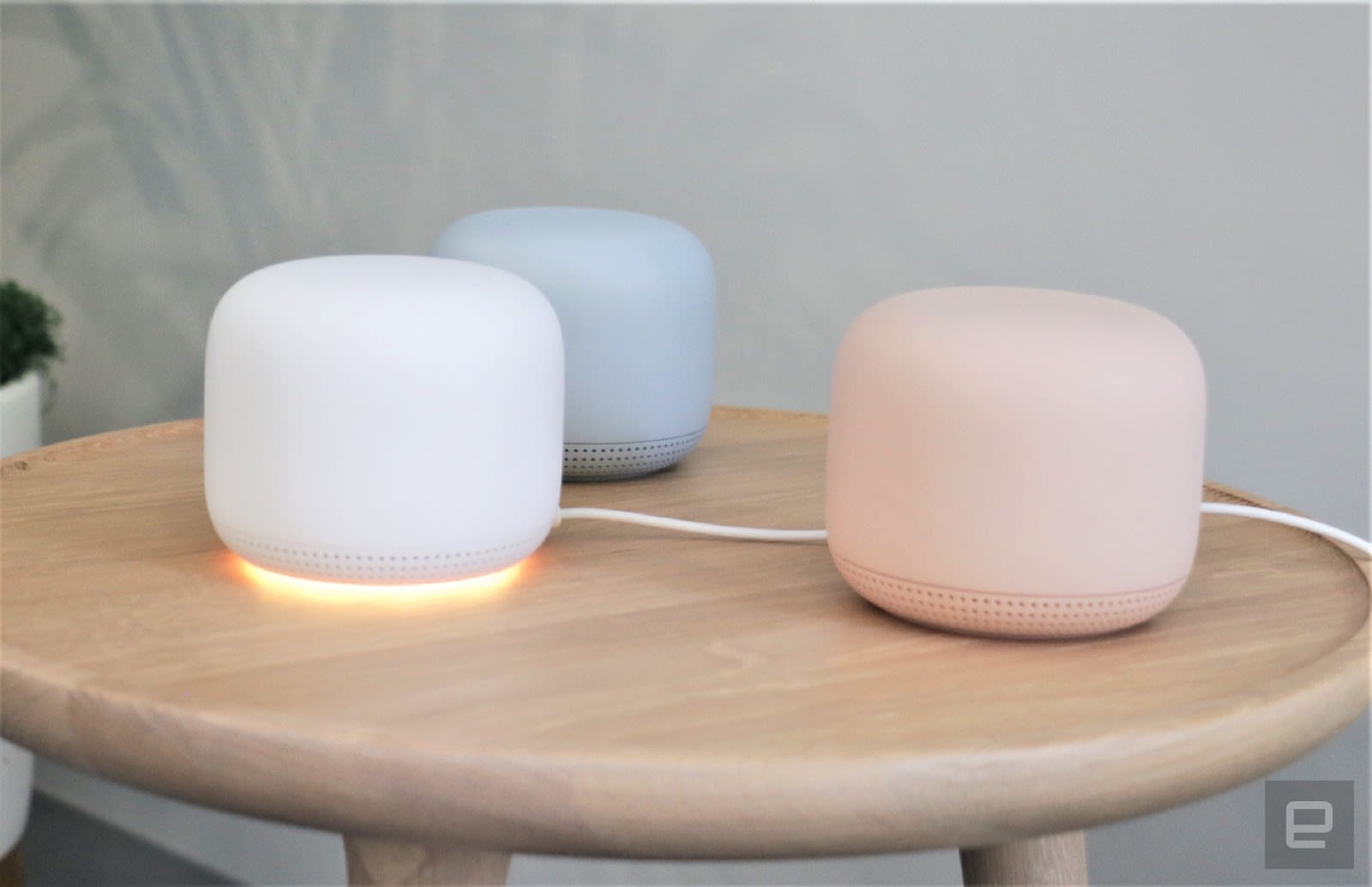 Physically, the new router and Points are taller and rounder than their predecessors. Sure, the original router had a circular shape, but its top and bottom edges were angular. On the Nest WiFi, there aren’t any sharp edges — pretty much every line is curved. This gives the devices a softer, homier aesthetic.

The actual router itself is available in white, while the Points come in white, pink or gray. You can buy them in packs of two (one router and one Point) for $269, which will cover up to 3,800 square feet — a range that Google says is adequate for most American homes. Beyond that, you can get the three-pack for $349 or add Points for $149 each (only available online). If you only need to cover about 2,200 square feet, you can just get the router itself for $169. Those who currently own the existing Google WiFi can add the Nest WiFi router or Points to their current systems.

Google’s product costs more than Amazon’s Eero, which starts at $99. But the latter offers less coverage (1,500 square feet with the router alone) than the Nest WiFi and only supports 2×2 MU-MIMO. Plus, only Google’s repeaters currently double as smart speakers. Considering you’re getting a two-in-one device, the Nest WiFi system looks to be a useful, attractive way to improve your home connectivity. You’ll just have to wait till November 4th for the devices to go on sale if you want to buy them.