BEIJING—The tally of deaths and infections from the spread of China’s new coronavirus mounted, further stretching hospital resources as authorities shut down parts of the Great Wall, canceled Lunar New Year events and locked down more cities near the center of the outbreak.

Singapore said it had two new confirmed coronavirus cases, bringing the total number there to three. All are residents of Wuhan, the central Chinese city where the outbreak originated in December in a seafood and meat market. The Wuhan residents were on visits to Singapore over the weeklong Lunar New Year holiday. Overall, Singaporean authorities have identified 28 suspected cases of the coronavirus; all but two of them had recently traveled to China.

Singapore’s Ministry of Health said it believes more imported cases of the disease will become apparent, given the high volume of overseas travelers arriving there. Thailand, another popular destination for Chinese tourists, also has three confirmed cases.

China has locked down some cities, including Wuhan, to try to contain a fast-spreading virus. WSJ’s Shan Li took one of the last trains out of the outbreak epicenter as millions adjusted travel plans for the Lunar New Year holiday. Photo: STR/AFP via Getty Images

The coronavirus has already spread to several other countries, including South Korea, Japan and the U.S. Hong Kong and Macau, special regions of China, have each confirmed two cases. Vietnam reported its first two cases Thursday evening, according to the country’s health ministry.

Hong Kong and Macau, special regions of China, have each confirmed two cases.

In response to the rapid spread of the disease, Chinese authorities have halted public transportation out of several cities in Hubei province, where the vast majority of the cases have been identified. On Thursday morning, local officials locked down Wuhan, the provincial capital and major transportation hub that is home to 11 million people. Outbound flights and trains were canceled and roads leading out of the city were blocked.

Within a day, at least 10 other cities in Hubei had said they would also suspend public transportation, according to the Communist Party’s flagship newspaper, People’s Daily. Several more cities imposed restrictions Friday on human movement, including Jingzhou—a city of 6.6 million people—which banned buses, cars and ferries from leaving. It set up body- temperature checkpoints at stations and highways around the city.

In neighboring Henan province, Guangshan county, with a population 860,000, set up its own restrictions on travel, a sign that the lockdowns are spreading beyond Hubei province.

Around China, public spaces and events closed or shut down in an attempt to reduce the risk of further contagion. In Beijing, the Forbidden City and sections of the Great Wall were closed until further notice, while Shanghai closed many major venues including museums, movie theaters and Shanghai Disneyland Park.

On Friday, the Chinese Basketball Association said it would postpone all games after Feb. 1; customers who had bought tickets could either return them or exchange them once new games were announced.

The U.S. and Japan, meantime, raised their alert levels, notifying travelers not to visit Hubei province.

The U.S. State Department has ordered the departure of all nonemergency personnel and family members, warning that the American government is limited in its ability to provide emergency services to citizens still in the province. Japan warned its citizens to avoid Hubei province entirely. 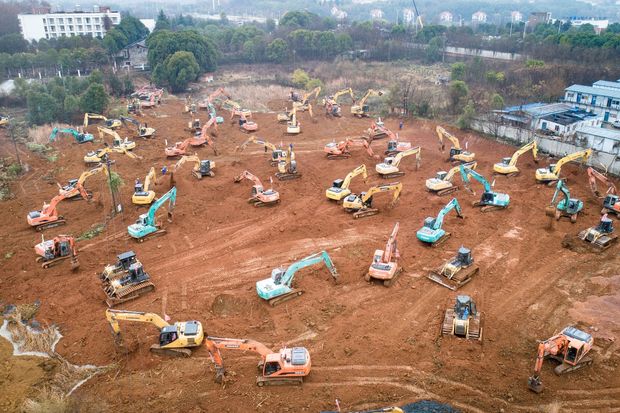 Construction began on a special hospital that is being built in a western suburb of Wuhan to accommodate patients infected with the new coronavirus.

The World Health Organization decided not to declare a global public health emergency on Thursday, saying it was still too early for such a move. WHO Director-General Tedros Adhanom Ghebreyesus said the situation may change in the coming days and he would reconvene the committee if need be.

—Jon Emont in Singapore contributed to this article.